Women being beaten, raped, stripped naked and paraded through their villages and a rape case as barbaric as the 2012 Nirbhaya case. These and a whole host of other atrocities were what the women marching for self-respect, and to end violence against Dalit and Adivasi women in the state of Odisha, India, came across on their path to justice. 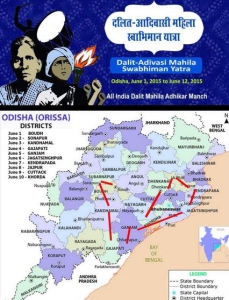 The march (Yatra) took place from the 1st of June to the 10th of June and passed through 11 districts in the state of Odisha. The march was organised by the national level Dalit Women’s movement – AIDMAM, following on the from the previous Dalit Women Self-Respect marches in Madhya Pradesh, Haryana, Uttar Pradesh, Bihar, and Maharashtra states. This march in Odisha united Dalit and Adivasi women together to fight for justice.

The men and women marched to fight the escalating vicious cycle of caste and gender discrimination that subjects women to violence, rape and violations of their basic human rights. The march empowers women to stand up for themselves and fight for justice.

In a press conference General Secretary of AIDMAM, Asha Kowtal, commented on the march saying,

“I have come across full spectrum of caste violence. The women have particularly been at the receiving end in Odisha in the last 10 days. To my utter shock, I have met survivors and victims of every type of violence, including kidnap, rape, murder, sexual assault, stripping, beating, verbal abuse, untouchability and discrimination,” said Asha Kowtal, General Secretary of AIDMAM, addressing a press conference here.”

Ms. Kowtal spoke of a rising violence against Dalit and Adivais women in the state amidst wilful negligence from the side of the police and judiciary and gave an example saying,

“In a recent chilling and inhuman crime, no headway has been made to apprehend perpetrators of the alleged rape and murder of a 15-year-old girl in Sargipally village of Bolangir district. The rape was as barbaric as the Nirbhaya case in New Delhi. But the police are silent and soft on perpetrators of caste-based violence.”

The Yatra in Odisha was organised after AIDMAM had been inundated with calls and reports, from Dalit and Adivasi women in Odisha, of the worsening caste atrocities against them and the lack of action from police officials and others meant to ensure justice. At times police were also found to be directly complicit in the crimes and in covering them up.

“For the last 10 days, the Dalit Adivasi Mahila caravan visiting village to village, town to town, meeting victims and survivors and community representatives; from civil society groups to district administration. The message seems to be loud and clear; fear and insecurity have seized the victims, survivors, making mockery of criminal justice delivery system for the Dalit and Adivasi women as the perpetrators seem to be at large with impunity while the officials seems to be callous and indifference to the cases giving rise to untold and increased violence.”

“The administration, if not complicit, seems to be indifferent towards the issues of Dalit women. Sure, the caravan has set in motion for securing justice for the victim survivors as well as strengthen human rights defenders to work vigorously for the cause,” he said.

In their memorandum presented in Odisha, to safeguard Dalit and Adivasi women from atrocities, AIDMAM demands the following.

Budget allocation and expenditure for Dalit and Adivasi Women:

News articles on the march

Other IDSN News on Dalit women’s activism and marches