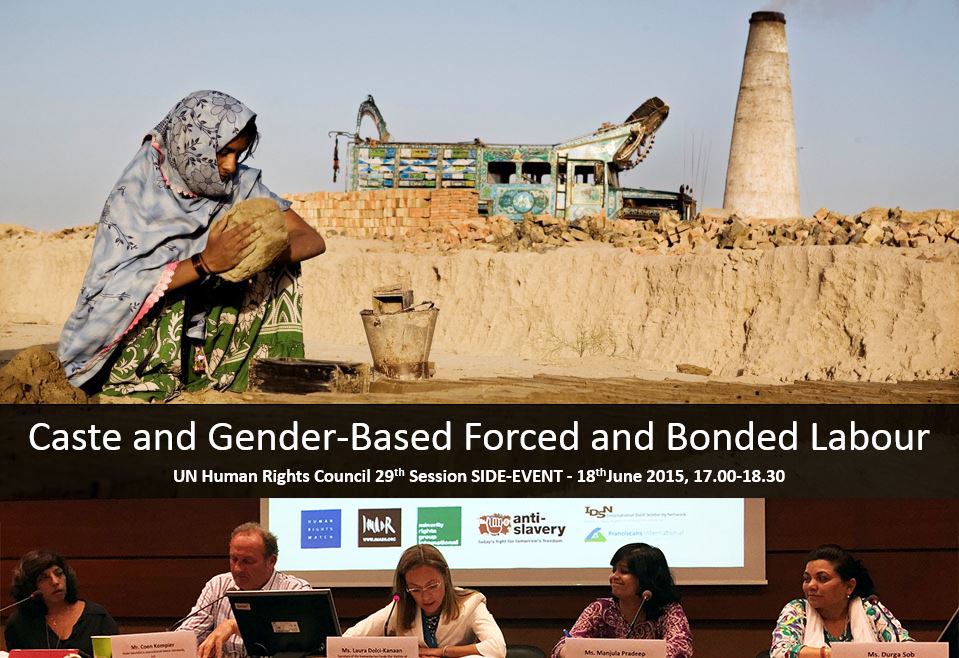 At the 29th session of the UN Human Rights Council, IDSN, with a number of sponsors, held a parallel event on “Caste and gender-based forced and bonded labour” The event included a keynote video address by the UN Special Rapporteur on Contemporary forms of Slavery, Ms. Urmila Bhoola and allowed for a constructive dialogue as well as a sharing of information and recommendations between UN agencies, civil society and States.

Co-Sponsors of the event were Human Rights Watch (HRW), the International Movement against All Forms of Discrimination and Racism (IMADR), Minority Rights Group (MRG), Anti-Slavery International, Franciscans International (FI). A report from the event has been produced.

Introduction from the report:

Opened by a statement from the UN Special Rapporteur on contemporary forms of slavery, Urmila Bhoola, the event highlighted the strong links between caste and slavery and uncovered recommendations for ways forward both within the United Nations framework and beyond.

“Successful fight against stigmatisation and deeply entrenched discrimination necessitates the involvement of all, which is only possible by means of broad awareness raising, increased social consciousness and denouncing of continued discrimination based on caste, gender and other factors that undermine human dignity and violate human rights. Events such as this one are an important part of it.” Urmila Bhoola, UN Special Rapporteur on contemporary forms of slavery

Coen Kompier, Senior Specialist in international labour standards from the International Labour Organisation (ILO) offered insight into the realities of Dalits working in forced and bonded labour and the many challenges to their successful rehabilitation. He warned that the UN and the ILO need to do more to support Dalits in their struggle and also need to diversify internally when hiring new staff. Mr. Kompier also raised a sharp critique of the global negligence in addressing caste discrimination.

“Caste-based discrimination is globally the most neglected form of discrimination, which seems to be accepted by countries and the UN through a lenient approach of cultural relativism instead of a firm stand against a most devious way of discrimination.” Coen Kompier, Senior Specialist, ILO

Laura Dolci-Kanaan, Secretary of the Humanitarian Funds (for Victims of Torture and Victims of Slavery), Office of the High Commissioner for Human Rights (OHCHR), moderated the event and echoed the concerns of Coen Kompier that despite rehabilitation efforts, if the underlying stigmatization and discrimination is not addressed, Dalits will be forced to relapse into these inhumane labour conditions.

Speakers working directly with the issues on the ground in South Asia included Manjula Pradeep (India), Durga Sob (Nepal) and a statement read out from Zulfiqar Shah (Pakistan). These speakers gave examples of the intersection of caste and gender in forced prostitution, manual scavenging, work in construction and textile industries and agricultural work including the Haliya practice in Nepal. Meena Varma, of the Dalit Solidarity Network in the UK also spoke of how to create change through multi-stakeholder initiatives and about Dalit girls working in forced labour under the Sumangali scheme in India’s textile industry.

All speakers called for more action by the UN and highlighted the need for comprehensive research and a multidimensional approach to address the lack of implementation of legislation and policies; they further recommended endorsement by the States of the UN Draft Principles and Guidelines for the Effective Elimination of Discrimination Based on Work and Descent.