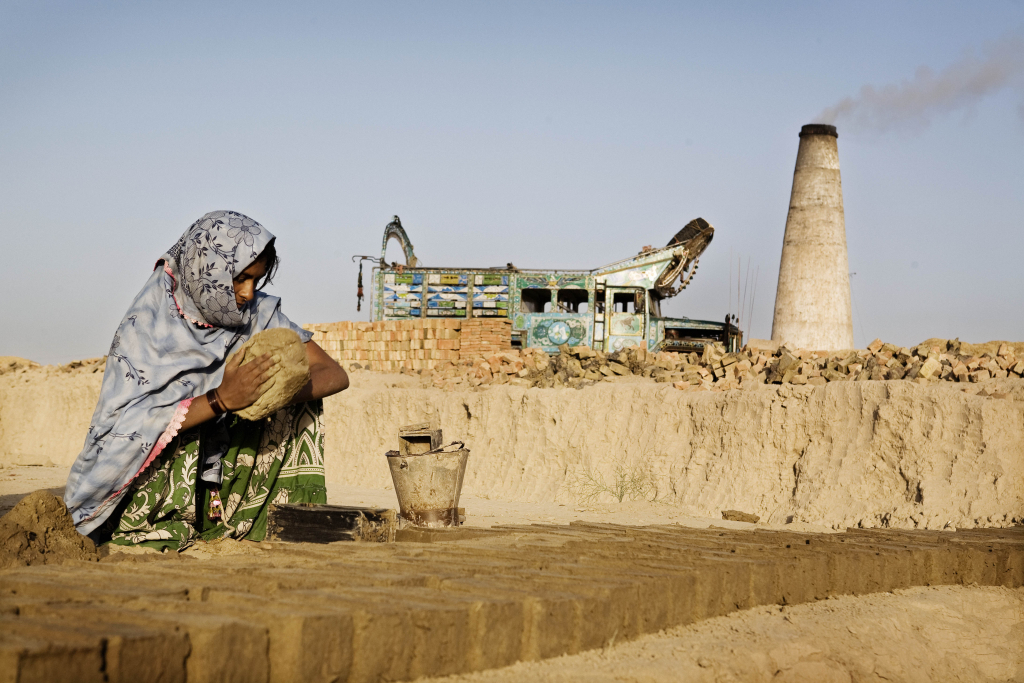 This Dalit woman works in bonded labour in a brick kiln in Pakistan. Photo: Jakob Carlsen

Despite being prohibited in many countries, slavery is widespread in South Asia. Forced and bonded labour, resulting in a loss of control over labour conditions and terms of work, is often interlinked with the caste system and related types of customary feudal agricultural relationships.

Those who are employed as bonded labourers in South Asia are predominantly Dalits, also known as ‘untouchables’. According to an Anti Slavery International report, the vast majority of bonded labourers (around 90%) are predominantly from scheduled castes and minority groups. Weak economic positions and lack of access to resources increase Dalits’ dependence on wage labour. Extreme poverty forces Dalits to take up loans and they hold no other assets to lever their debt other than their labour. In addition to poverty, practices of social exclusion of Dalits push them into bondage.

When Dalits try to exercise their rights or resist abuse and exploitation, they are faced with extremely hostile and sometimes brutal resistance by the higher caste villagers that uphold the hierarchy. Consequently, when Dalits resist their oppression, they risk complete boycott, cutting them off from land use, access to markets and employment.  Other retaliations against Dalit assertion include killings, gang rapes, looting and arson.

Forced and bonded labour in numbers

There is no accurate number on the global scale of forced and bonded labour. According to the ILO, the global number of forced labourers was 21 million persons in 2012. Out of this number, the Asia and Pacific Region accounted for approximately 11,7 million persons. There are however no comprehensive studies on the number of bonded labourers that have a scheduled caste background.

Forced and bonded labour are contemporary forms of slavery, and they are prohibited under international law, including the UN Slavery Conventions of 1926 and 1956, and ILO Conventions.

Bonded labour is defined in the 1956 UN Supplementary Convention on Slavery as “the status or condition arising from a pledge by a debtor of his personal services or those of a person under his control as security for a debt, if the value of those services as reasonably assessed is not applied towards the liquidation of the debt or the length and nature of those services are not respectively limited and defined.”

In June 2014, the ILO adopted the ILO Forced Labour Protocol 2014 to the Forced Labour Convention (No. 29), 1930 to give new impetus to the global fight against forced labour, including trafficking in persons and slavery-like practices and provide specific guidance on effective measures to be taken to eliminate all forms of forced labour.

Read more about the ILO and caste discrimination

Below is a video dealing with caste discrimination and bonded labour. Visit IDSN’s YouTube Channel for more videos on other themes/countries.

Caste-based slavery is a form of bondage based on work and descent, which is carried on for generations by members of the same occupational caste. In South Asia this form of slavery affects Dalits as a social group, and is closely linked to religious, cultural, and caste-based social relationships, as well as skewed land-ownership patterns. In some African countries similar forms of caste-based slavery exist e.g. in Mauritania, Niger, Mali and Chad. As reported by the UN Special Rapporteur on contemporary forms of slavery, Ms. Gulnara Shahinian in 2008, these old forms of slavery are embedded in traditional beliefs and customs as a result of long-standing discrimination against the most vulnerable groups in societies such as: those regarded as being of low caste, tribal minorities and indigenous peoples (A/HRC/9/20).

A range of ILO studies on bonded labour relations reveal the link between the social hierarchies of caste and relationships of bondage, which leaves Dalits, tribal groups, women and children the main targets of exploitation. Bondage is usually passed on from one generation to another and Dalits are often deprived of other options. Other reports by Anti-Slavery Internationalshow how caste-based occupations include degrading practices such as manual scavenging and certain systems of forced prostitution, especially in India and Nepal. Dalits risk discrimination, abuse and economic and social ostracism if they refuse to subjugate. For Dalits, bonded labour is an entrapment with little chance of escape.

The UN Special Rapporteur on contemporary forms of slavery referred to these links in a 2009 report to the Human Rights Council stating that “ILO research shows a clear link in Asian countries between forced labour and long-standing patterns of discrimination. In India, the overwhelming majority of bonded labour victims in agriculture, brick making, mining and other sectors are from Scheduled Castes and Scheduled Tribes” (A/HRC/12/21). Please download an overview of references to caste-based slavery by international human rights mechanisms.

The ILO defines forced labour as work or service undertaken involuntarily and under threat or penalty. Bonded labour is usually a result of economic necessity and other external constraints such as poverty, social exclusion and denial of human rights. Bonded labour is reinforced by various customs and coercion and can also be enforced onto other family members, for instance children and marital family members. Often, labourers are not aware of the value of their work and the status of their debt, which is one of the reasons that lead to life-long bondage. Under such circumstances the bondage can be characterized as forced labour.