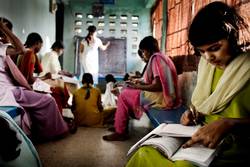 Discrimination against Dalits in the educational system is a widespread problem in caste-affected countries. Alienation, social exclusion, and physical abuse transcend all levels of education, from primary education to university. Illiteracy and drop-out rates among Dalits are very high due to a number of social and physical factors. Legislation on the area is limited, and measures that have been taken are often inadequately implemented.

The forms of structural discrimination and abuse that Dalit children face in schools are often so stigmatising that they are forced to drop out of school. One of the main issues is the discriminatory practices conducted by teachers, which may include corporal punishment, denial of access to school water supplies, segregation in class rooms, and forcing Dalit children to perform manual scavenging on and around school premises.

In addition, Dalit children face discriminatory attitudes from fellow students and the community as a whole, in particular from higher caste members who perceive education for Dalits as a threat to village hierarchies and power relations.

Intolerance, prejudice and harassment towards Dalits are equally prevalent in institutions of higher education where discrimination is practiced by senior upper-caste students, teachers, faculties, and administrations. The caste bias manifests itself in the way teachers ignore Dalit students and unjustly fail them in exams, in social exclusion and physical abuse, and in the unwillingness of the university administration to assist Dalits and support them. As a grave consequence of this harassment, a disproportionate number of Dalit and Adivasi students have committed suicide in India.

In 2006 the Special Rapporteur on the right to education, Mr. Vernor Munoz, recommended governments to “remove known barriers to the enrolment and retention in school of young and teenage girls belonging to all ethnic groups, castes and communities that are discriminated against” in in his report on girls’ access to education, paragraphs 80-85 and 140 (E/CN.4/2006/45).

IDSN recommends governments to take, as appropriate, the following measures to ensure Dalits’ right to equal participation and non-discrimination in education:

Read the action-oriented recommendations to ensure Dalits’ access to education

Building on existing principles of international human rights law, the draft UN principles and guidelines for the effective elimination of discrimination based on work and descent propose specific measures to be taken by governments to enhance Dalits’ access to education.

IDSN recommends that the draft UN principles and guidelines may be used as a guiding framework for governments, international institutions, UN expert mechanisms and private actors that seek to comprehensively address issues pertaining to this entrenched form of discrimination.

International human rights instruments create binding obligations on governments to ensure non-discrimination for all in the fulfilment of civil, political, social, economic, and cultural rights.

Read about the international obligations of governments to ensure non-discrimination

The first thematic session of the UN Forum on Minority Issues, held in December 2008, had a focus on minorities’ access to education. Ms. Meghna Guhathakurta from Bangladesh was invited by OHCHR to speak about Dalit rights and access to education. Ms. Guhathakurta is the Executive Director of Research Initiatives and she contributes actively to the work of the newly formed Bangladesh Dalit and Excluded Rights’ Movement (BDERM).

All documents on education

Below is a video dealing with caste discrimination and education. Visit IDSN’s YouTube Channel for more videos on other themes/countries.