Study on Caste Commissioned by DEVE 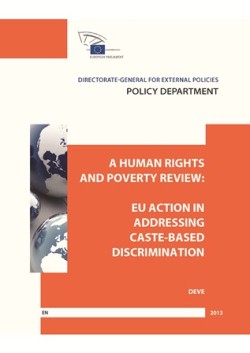 A study commissioned by the European Parliament’s Committee on Development (DEVE) recommends a stronger EU role in the fight against caste discrimination.

The study ‘A human rights and poverty review: EU action in addressing caste-based discrimination’ was published in February 2013 and debated by DEVE that same month

The document concludes that the EU could and should do more to combat caste discrimination. This would include integrating measures against caste discrimination into policies, strategies and development programmes that deal with caste-affected countries and addressing the issue in dialogues with those countries.

The study presents the situation in five caste-affected countries – Bangladesh, India, Nepal, Pakistan and Yemen – and analyses the EU’s actions to combat caste discrimination in those countries.