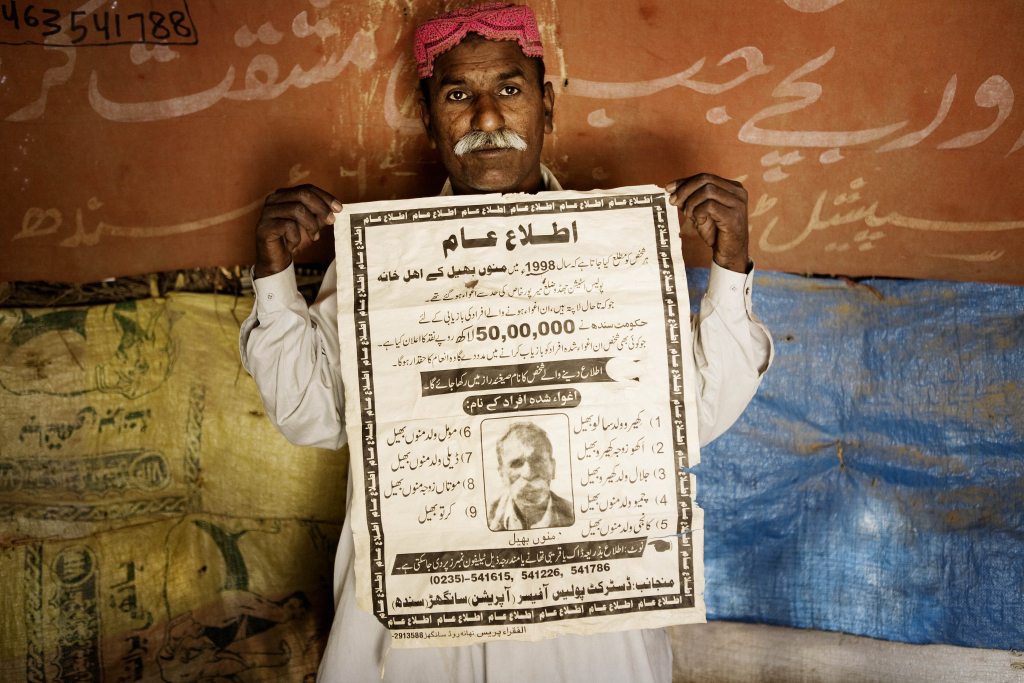 Manu Bheel with a poster listing the names of his missing family members. Photo: Jakob Carlsen

A case of bonded labour, kidnapping and denial of access to justice

1996: Manu and his family are freed from bonded labour

Manu Bheel is a Dalit belonging to the Bheel “sub-caste”. In 1996, Manu Bheel briefly represented a story of change, when he was among 1 000 bonded farm workers in Sindh province to be released. Most of them were “lower caste” Hindus, forced to work as bonded labourers in conditions resembling slavery after poverty had forced them to take loans from their landlords. This is a destiny shared by hundreds of thousands of Dalits throughout South Asia.

The release was followed by a rehabilitation programme after which Manu and his family managed to create a new life for themselves as wage labourers. But their happiness was short-lived.

In 1998, two years after his release, nine of his family members were kidnapped, allegedly by men sent by his former landlord Abdul Rahman Mari.

Manu Bheel rushed to the police. But the window of political opportunity that had secured Bheel’s own release had meanwhile closed. Former prime minister, Benazir Bhutto, had been replaced by Nawaz Sharif whose allies include Pir Pagara and his Pakistan Muslim League (Functional).

Pir Pagara in turn is supported by Bheel’s former landlord Abdul Rahman Mari. Thus a change in the political landscape allowed Mari to seek revenge for Bheel’s release and to kidnap his family with the impunity that characterises so much of the abuse of Pakistan’s Dalits.

Eight years after the kidnapping – and after Anti-Slavery International had brought international attention to the case – the Supreme Court ordered the police to recover Manu Bheel’s family but the police claimed they were unable to do so. This prompted the Chief Justice of Pakistan to ask the Inspector General of Sindh Province to intervene.

But by May 2008, the case is still unresolved. And, Manu Bheel continues his five-year long symbolic hunger strike that has become a symbol of the fragility of any improvements in the life of Pakistan’s “lower caste” Hindus.