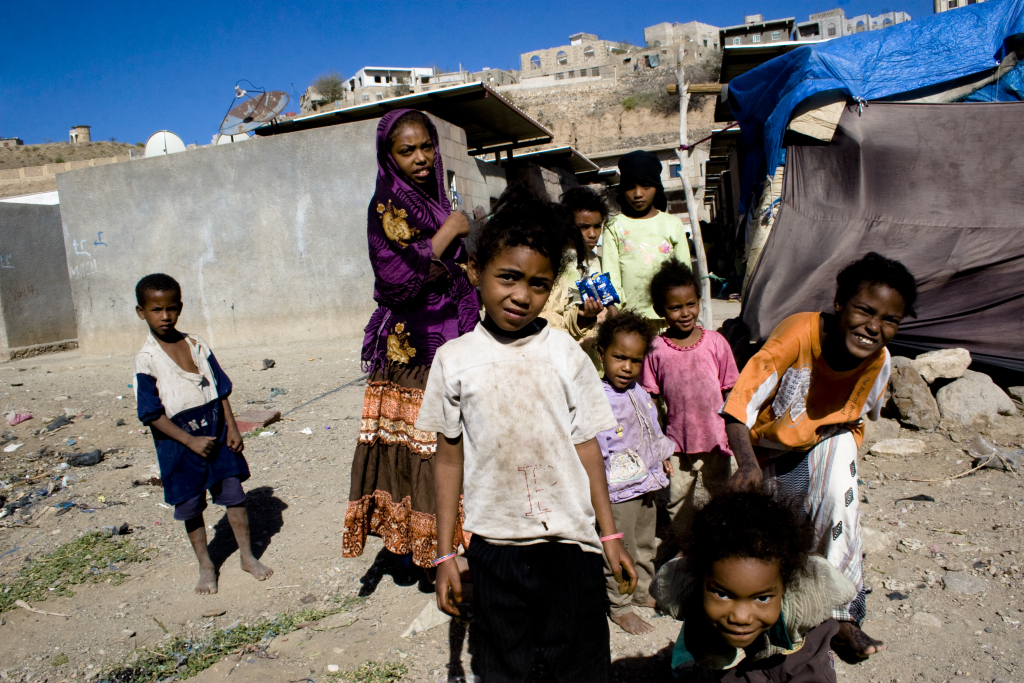 Muhamasheen children in Yemen often have to work and consequently drop out of school. This severely limits their possibilities in the labour market. Photo: Mathieu Génon / justdia.org

The Muhamasheen (formerly known as “Al-Akhdam”) community is a minority group, which is regarded as an “untouchable” outcaste group in Yemen. For centuries the Muhamasheen has suffered perpetual discrimination, persecution, and social exclusion from mainstream society. They are at the bottom of the social and economic hierarchy when it comes to access to employment and conditions of work, and they are forced to live isolated from the remaining society.

Although they are commonly known as Al-Akhdam – the servants, they prefer to be known as Al Muhamasheen – the marginalized ones. (Minority Rights Group 2016)

The total figure of this population is unknown, and there are large inconsistencies between official and unofficial numbers. The government census of 2004 stated that the number is 153.133, but other sources claim that between 500.000-3.5 mio. persons belong to this minority group.

Some of the most critical problems affecting the Muhamasheen population is the lack of access to adequate housing, employment, education, and basic social services. This has a negative effect on other living conditions, including health conditions. The Muhamasheen earn their living by performing dirty jobs such as sweeping, collecting plastics, or begging – the latter being especially common for women. The level of child labour is extensive and adds to a vicious cycle of school dropouts and limitations in access to employment due to lack of basic education. Moreover, many Muhamasheen children suffer from serious diseases such as dyspnoea, malaria, and polio, and the death rate is high.

Below are a selection of videos dealing with caste discrimination in Yemen. Visit IDSNs YouTube Channel for more videos on other countries/themes.