A new Minority Rights Group (MRG) report on Yemen focuses on the extreme situation faced by the minorities in the war torn country. The report finds that the Muhamasheen, discriminated against on the basis of caste, reside in some of the worst hit areas of Yemen but face exclusion in access to shelter, relief articles and health facilities. The report states that the Muhamasheen are at risk of death, disease, hunger and further violence and humanitarian actors and the international community must step up efforts to offer relief to these communities. 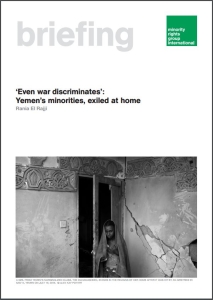 The report examines how minorities in Yemen are coping, as war continues to ravage the country, exacerbated by countless airstrikes and import embargoes. MRG writes that as of December 2015, the UN office for the Coordination of Humanitarian Affairs (OCHA) estimated that 21.2 million Yemenis, around 82 per cent of the country’s population, were in need of humanitarian assistance: of these 14.4 million were food insecure and more than 2.5 million had been internally displaced.

Looking at the situation of the Muhamasheen (also known as “Al-Akhdam”), it is clear that this group is particularly hard hit as what little relief that may be provided in the face of the war, is not reaching these communities.

“Muhamasheen live in cities most affected by the conflict, such as Aden, Taiz, Hodeida and Saada. Coalition airstrikes and heavy bombing have forced them to seek refuge elsewhere … they have tended to flee to open farmland, parks and public spaces, and have been largely left to their own devices.” The report states.

It is explained in the report that historic exclusion faced by this community means that they do not generally attempt to enter relief shelters occupied by the general Yemeni population and instead face isolation.

“The war has had a devastating impact on the Muhamasheen, who suffer caste-based discrimination and fall outside of traditional tribal and societal structures. They mostly live in slum areas on the outskirts of cities, and many are unemployed or confined to menial jobs, such as garbage collection,” the report states.

Other issues addressed in the report includes the forced early marriages of young Muhamasheen girls to ease economic burdens and Muhamasheen boys being forcefully recruited to the frontlines of the war.

Finally, the report finds that the humanitarian catastrophe in Yemen is grossly underreported and is not adequately dealt with by International actors including the United Nations. This leaves not only the marginalised in Yemen, but the entire country, at peril and in extreme deprivation. The report aims to shed light on the crisis and urges international action to help the millions of victims left fending for themselves.

‘It feels as if the world turned the lights oﬀ and left our house. Alone we stand in this darkness.… Tell them we will light all our candles, for hope’. Yemeni doctor, Sana’a, September 2015, cited in the report

Find out more about the Muhamasheen in Yemen