No more silence: Companies must address caste in their global supply chains

Remaining silent about caste discrimination in global supply chains is fueling modern slavery, child labour and the exploitation of workers in South Asia, according to new ETI Base Code guidance for companies published today. 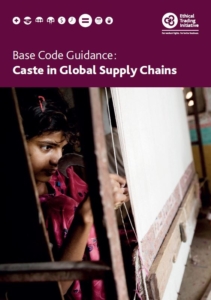 Caste in global supply chains, which has been produced in partnership with the Dalit Solidarity Network, outlines 4 explicit steps businesses can take to tackle caste in their supply chains  in order to comply with their human rights obligations and UK modern slavery legislation.

Caste-affected countries are home to over half of those working in slavery and child labour in the world. Experts agree that over 80 per cent of those in bonded labour or child labour in India, Nepal or Pakistan are either Dalits (lowest castes) or from indigenous groups. Forced and bonded labour as well as child labour, involving Dalits, has been documented across sectors including in garments, leather, agriculture, construction, carpet weaving and stones and minerals.

Peter McAllister, Executive Director of Ethical Trading Initiative, comments: “Dalits are particularly vulnerable to exploitation and often this is not understood by global companies. There is now an opportunity to shine a light on exploitation of Dalits and put  strategies in place to ensure that they are able to access their rights at work.

“This guidance tool will help companies understand the issue and take action to mitigate their risks of fueling exploitation and human rights violations within their operations in South Asia.”

The guidance also explains the historical ties between the caste you are born into and employment, with Dalits traditionally being forced to do the most demeaning and toughest work under substandard pay and working conditions. It offers advice on how to take action to ensure inclusive workforces and combat caste discrimination in hiring and promotion practices.

“Many companies sourcing from South Asia are unaware of the role that caste plays in relation to who is doing what jobs in their supply chain and their vulnerability to exploitation,” says Meena Varma of the Dalit Solidarity Network UK. “Companies need to dig deeper into the composition of their work force and remedy caste-based discriminatory practices.

The Guidance released today is a publicly available on the ETI website and will be distributed widely to global companies with supply chains in South Asia. The Guidance includes an overview over the key sectors affected and outlines four key steps to “caste proof your business”.

Base Code Guidance: Caste in the Global Supply Chains