Following his visit to Nepal that started on 29 November, the UN Special Rapporteur on extreme poverty, Olivier De Schutter, released a statement highlighting the persistent interconnections between caste and poverty in Nepal. The Rapporteur also raised issues of caste violence and the need to do more to ensure meaningful political representation of Dalit women in Nepal. 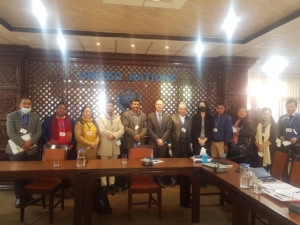 “Though banned, caste-based and ethnicity-based discrimination remain a reality in social life, and it is a major factor explaining the perpetuation of poverty,” De Schutter commented in the press release issued.

“Land issues remain unresolved, despite the efforts to accelerate the rehabilitation of former bonded laborers and to ensure landless Dalit benefit from land redistribution.”

The UN expert met with communities who suffer from intersecting forms of deprivation. Many were from historically disadvantaged and discriminated groups including Dalits.

IDSN welcomes the attention paid to this crucial human rights issue by Olivier De Schutter, and the time he has taken to engage with Dalit human rights defenders, including many IDSN members and affiliates, on his visit to Nepal.

The Rapporteur also praised the Nepal Government over the many legislative measures taken to protect marginalised groups in the country, while calling for enhanced implementation.

He has elaborated on the issues associated with caste in his end of mission statement – please see the caste-related passages of the statement here:

“Indeed, sporadic yet tragic outbursts of violence resulting from inter-caste marriages suggest that, while a mainstream narrative highlights social cohesion and harmony, resistance by dominant groups is strong when historical hierarchies are questioned. Although untouchability was declared illegal more than a decade ago, with the adoption of the 2011 Anti-Caste Discrimination and Untouchability Act, caste-based discrimination persists across the country, with lingering prejudices continuing to cause significant violence within Nepali society…

Dalit, who occupy the lowest varna of the caste system and constitute at least 13.6% of the total population, are particularly affected by such violence and discrimination. A report on the perception of harmful practices found that 97% of respondents considered that discrimination based on caste occurs in their community, with nearly half of respondents stating that Dalit would not be allowed into the house of non-Dalit in their communities. Moreover, more than half of Dalit respondents reported having experienced caste-based discrimination within the past year, which included being denied entry into the home of “higher-caste” families, or being denied access to using communal water sources or village temples…

Discrimination is the single most important factor explaining why the Dalit are disproportionately affected by poverty: around 42% of Dalit live below the poverty line (43.6% of Hill Dalit and 38.2% of Terai Dalit), whereas the national poverty rate is 25.2%. While the immediate causes of this gap are limited employment opportunities due to occupation specialization preventing Dalits from accessing well-paid jobs, as well as lack of access to (quality) education and land that perpetuates poverty from one generation of Dalits to the next, the persistence of social discrimination is the overarching factor explaining this situation…

In order to implement the “inclusive principle,” a reservations policy has been put in place since 2007, providing that 45% of positions in the federal civil service should go to specific disadvantaged groups as now identified in the Constitution. This policy was effective to some extent: women’s representation in civil service, for instance, increased from 11% in 2007 to more than 20% a decade later, a remarkable achievement in such a short period of time. However, progress was slower for other groups. Dalit representation in the civil service was below 1% prior to the introduction of the reservations policy, but it remained around 2% by 2018, which remains significantly below the aims set by the policy…

The directive order adopted on 1 August 2021 by a Supreme Court joint bench of Justices Bishwambhar Prasad Shrestha and Anand Mohan Bhattarai now presents the Government with a new challenge. The Justices essentially ruled that the reservation system should be focused on needs and not on ethnicity: socio-economic status rather than an individual’s caste or ethnic identity, the judgment states, should be considered when allocating reservations. The Court also ruled that an individual could only benefit once in a lifetime from the reservations system…

The proper answer to the judgment, in the view of the Special Rapporteur, is not to abandon the reservations policy and replace it by a system that focuses on socio-economic status only, but to improve it in three ways. First, intersectionality should be properly considered. In order to avoid, for instance, that all the positions set aside for Madhesi be captured by men, or that all positions set aside for women be captured by non-Dalit women, the reservations policy could take into account the intersection of caste, ethnicity, sex, and disability – defining, for instance, the appropriate representation of Madhesi Dalit women with a disability among the reserved positions.”