UN Expert on Extreme Poverty Presents his Visit Report to Nepal, highlighting his concerns about Dalits and their susceptibility to poverty 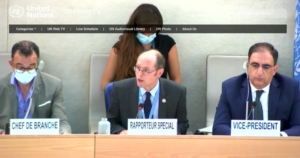 The UN Special Rapporteur on Extreme Poverty, Olivier de Schutter, presented to the Human Rights Council his visit report to Nepal, which took place from 29 November to 9 December 2021. His visit was supported by IDSN and its national partners Feminist Dalit Organisation (FEDO) and Dalit NGO Federation (DNF), whose staff met the Rapporteur in country and showed him the situation of Dalits on the ground.

During the Interactive Dialogue, Mr. de Schutter noted that “Discrimination is the single most important factor in explaining why Dalit people are disproportionately affected by poverty: around 42 per cent of Dalit live below the poverty line (43.6 per cent of Hill Dalit and 38.2 per cent of Terai Dalit), far above the national poverty rate of 25.2 per cent. While the immediate causes of this gap are limited employment opportunities owing to occupation specialization preventing Dalits from accessing well-paid jobs, as well as lack of access to (quality) education and land that perpetuates poverty from one generation of Dalit to the next, the persistence of social discrimination is the overarching factor explaining this situation.” You can watch Nepal’s response to the report here.

The Interactive Dialogue was followed by the participation of Dalit activists and IDSN international members. Forum Asia and FEDO delivered an oral statement noting the Rapporteur’s concerns on the continuing practice of debt bondage and bonded labour, which forms part of discriminatory and exclusionary attitudes of the government towards Dalit and indigenous communities. The statement also highlighted the fact that the authorities had so far failed to enforce the Bonded Labour (Prohibition) Act 2002. The majority of persons suffering from this scourge are Dalits. Moreover, lack of access to essential services and denial of basic safeguards against rights violations make it impossible for Dalits and other minority communities to break from intergenerational cycles of poverty and exclusion.

IDSN partner IMADR also delivered a strong oral statement, focusing on the rights of Dalit women and girls, who are marginalized and made invisible in society. The statement highlighted that Nepal, despite having one of the most progressive constitutions in the world on inclusivity, still faces enormous challenges with inclusion of the Dalit community, especially its women and girls who have long faced many problems including poverty, illiteracy, poor health, malnutrition, early marriage and violence. The statement presented a survey conducted by the Nepal Women’s Rehabilitation Center in 2020, showing that Dalit women are the most subjected to violence, with 18 percent of a total of 1673 cases of violence against women and children.

IDSN reinforces the findings of Mr. Schutter’s report and the calls from its members and partners in Nepal to implement recommendations in good faith, and in close consultation with the Dalit community, in particular Dalit women.