On 14 November the Alderbugh Cinema DocFest invited the IDSN Executive Director to speak about Dalit women human rights defenders and caste in South Asia at the screening of the award winning documentary Writing with Fire. 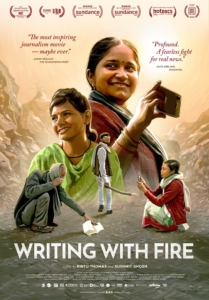 Writing with Fire tells the story of Khabar Lahariya: a media outlet in Uttar Pradesh, India, run by Dalit women. Chief Reporter Meera and a team of exclusively female journalists – armed with smartphones – break traditions on the frontlines and within the confines of their own homes. Beautifully shot in Uttar Pradesh, the documentary shines a light on the challenges and human rights violations faced at the intersections of poverty, caste and gender, and is an uplifting account of the bravery of the women reporters who try to hold power to account.

At the screening, IDSN Executive Director, Meena Varma, took part in a panel discussion chaired by India Knight, journalist and columnist for the Sunday Times.

The film portrays caste and how it plays out in the lives of the Dalit journalists and the community, journeying with them go see how they challenge and negotiate a seat at the table. The films Directors hope to inspire viewers to identify and interrogate the structural inequities that they have come to accept in their own lives and cultures and investigate their own role in it.  The Dalit women that this film revolves around show incredible agency and courage just like the many Dalit human rights defenders that form part of IDSN and beyond. Meena Varma gave key insights into caste discrimination and how it affects the human rights of over 260 million people worldwide.

IDSN has been engaging with the film and the film’s Directors for some time and we look forward to more joint efforts to raise global awareness of the need for caste and gender justice.

Watch the Writing with Fire trailer: