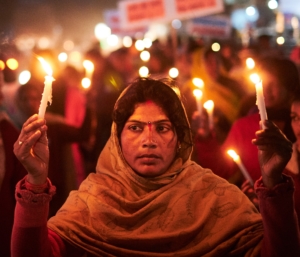 On a Sunday evening in early August, a nine-year old Dalit girl went to a crematorium across the street from her dwelling in the Indian capital Delhi to fetch cool drinking water. She never returned.

“At the crematorium, I found her lying on the ground. Her lips were blue, there was blood under her nose, she had bruises on her hands and arms and her clothes were wet,” the girl’s grieving mother told the BBC.

Four middle-aged men – including a Hindu priest at the crematorium – have since been charged with raping and murdering the nine-year old child. Claiming that the girl had been accidentally electrocuted, they put pressure on the mother to have her daughter cremated in an apparent attempt to destroy evidence.

Later that same month, a 13-year old Dalit girl from West Delhi was allegedly raped and killed by a relative of her landlord. Again, the perpetrators appear to have lied about the cause of death claiming that the girl had succumbed to food poisoning. And again, they tried to have the murder victim cremated immediately to avoid a post-mortem examination.

However, neighbours of the deceased girl’s parents intervened and persuaded her father to contact the police. The alleged perpetrator has since been arrested and charged with several crimes, including murder.

These recent horrors are among the countless cases of sexual assault against Dalit girls and women that permeate Indian society. Dalit women are subjected to multiple forms of discrimination due to their caste, gender, and low economic status, and are particularly vulnerable to sexual violence. Despite their historic status as ‘untouchable’ at the very bottom of the caste hierarchy, they are considered legitimate sexual targets by members of dominant castes.

In other caste-affected countries in South Asia, Dalit women and girls face similar forms of violence as in India, but there are also country-specific abuses. In Pakistan, hundreds of Dalit girls and young women are subjected to forced religious conversion, and forced marriage.

According to, albeit incomplete, official statistics, there has been a significant rise in atrocities – the official term for caste-based crimes – against Indian Dalit women and girls in recent years. The National Crime Records Bureau (NCRB) recorded 46 percent more incidents in 2019 than five years previously. The increase in registered rape cases was even higher at 56 percent.

Following the murder of the nine-year old Dalit girl, hundreds of people protested against the crime and alleged police indifference. Politicians, including Delhi’s chief minister, commented on the case. But all too often, crimes against Dalits are ignored by the police as well as the public, and the conviction rate is low.

In many cases, the police even act as an obstacle against the struggle for justice for victims of such crimes or their surviving relatives. In September 2020, a young Dalit woman from the state of Uttar Pradesh was assaulted and gang raped by four men from a dominant caste. After fighting for her life for two weeks, she succumbed to her injuries. Her family accused the police of cremating her body without their consent, thereby destroying evidence.

This case also attracted a lot of public and political attention which may have helped the family in its struggle to gain some sort of justice. But according to a report published in late 2020 on sexual violence against Dalit women in the state of Haryana, only a fraction of cases are reported.

Haryana is known as the “gang rape capital of India”, but the report’s findings are also relevant elsewhere. They are based on 40 cases of rape against Dalit women and girls and reach the following conclusions:

During the COVID-19 pandemic, the practice of safe distancing during lockdowns should, theoretically, have made Dalit women and girls less vulnerable to sexual assault. Nevertheless, such attacks continue and may, in some cases, even be related to lockdowns.

A 40-year-old Dalit woman from Rajasthan returned to her village during the lockdown and was asked to stay at a quarantine centre. At night, three men from a dominant caste sneaked into the centre, gagged her, tied her up, and took turns to rape her.

In Tamil Nadu, a seven-year-old Dalit girl disappeared while playing outside her village hut. Her school was closed due to the lockdown. Later, her battered body was found in a swamp. A man from a dominant caste was arrested and confessed to raping and murdering her.

While atrocities against Dalit women and girls in India and elsewhere continue unabated, Dalit women activists are increasingly standing up for their rights. Numerous campaign groups organise protest marches, document and publicise atrocities, and offer their support to Dalit women.

Such activities are not without risk as the response from dominant castes against Dalits fighting for their human rights can be brutal. Nevertheless, the Dalit women’s struggle continues and has also been taken to the international arena, including the UN human rights system.