“Even if no one else recognizes us as human, we will shout it from the rooftops. … The shame is not on the women, the shame is on India,” said US Dalit woman filmmaker Thenmozhi Soundararajan in the talk she gave together with Asha Kowtal from AIDMAM, at the high profile Women in The World Summit in New York**. Uma Thurman introduced the talk by playing the part of a Dalit woman rape victim and NBC anchor Cynthia McFadden moderated the discussion. 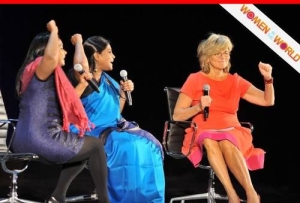 Video clips filmed by Thenmozhi Soundararajan from the Dalit women’s march in India introduced the talk followed by a reading of a the Dalit woman rape victim Manisha’s story by actress Uma Thurman.

“The law is not meant for us. … I am all alone,” Uma Thurman read from Manisha’s story. Asha Kowtal, general secretary of the All India Dalit Women Rights Forum (AIDMAM), explained to the crowd at the summit and all those watching on live streams 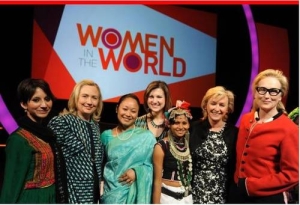 – that Manisha’s story is not only typical, but it’s widespread — and silenced — simply because they were born into the lowest castes.

Moderator Cynthia McFadden, senior legal and investigative correspondent for NBC News, cited a disturbing statistic that even when a rape case makes it to court, the perpetrator is punished only one percent of the time.

Asha Kowtal explained that there is a massive problem with widespread impunity in cases of crimes against Dalit women where reports are often not taken by the police and even when the case does get reported by the police the chances of justice for Dalit women are slim to none.

Thenmozhi Soundararajan gave the disturbing example of a case where a Dalit woman rape survivor showed a judge video footage of her rape that was circulated around her village by the perpetrators, but the judge simply laughed and said “Great, now you have proof that you enjoyed yourself.”

The two women described the Dalit women march that they were both a part of where Dalit women marched for self-respect and visited rape victims to empower them and demand that the police bring the perpetrators to justice.

Cynthia McFadden was shocked that she did not herself know more about the issue of caste discrimination and the violent repercussions for Dalit women, because it was so underreported in the global media. Even in the wake of the 2012 Delhi gang rape case that was widely reported – similar cases against Dalit women went under the radar. McFadden vowed that this lack of media attention was something she would personally change.

Asha Kowtal stressed that caste-based sexual violence is a full-fledged human-rights crisis that has been perpetuated throughout centuries. The two women explained that Dalits are essentially seen as voiceless and are stripped, beaten, spat on, raped with objects, and even burned alive. Their minds and bodies are constantly violated.

The audience at the Summit in New York were behind the women and shouted out Dalit Women Fight in unison at the end of the talk.  “We have to end the silence,” said Asha Kowtal in conclusion.

** The Women in the World Summit is: a powerful summit centered on women and men from around the world sharing their true stories of courage, resilience, and determination for progress. Featuring CEOs, industry icons, and world leaders, as well as artists, and grassroots activists. The 3-day event makes vivid the stories of the courageous women who are shattering glass ceilings in every sector and fighting for their rights.