Groundbreaking Report on Claiming Justice for Dalits in India 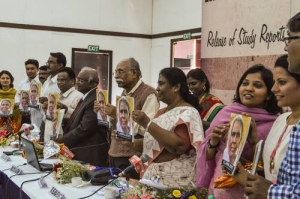 New Delhi, India – April 14, 2014: Nazdeek, a legal capacity building organization committed to bringing access to justice close for marginalized communities in India, in collaboration with the National Dalit Movement for Justice  announces the release of the groundbreaking report Claiming Justice: A Study of Civil Society Organizations’ (CSO) Interventions in Addressing Atrocities Against Dalits and Tribals. Based on an extensive five-state canvas of the Indian heartland, the report highlights interventions taken by five leading Dalit and Tribal organizations in supporting victims of atrocities through the criminal justice system. Ramesh Nathan, General Secretary of NDMJ states, “This study is the outcome of the innumerable experiences gained by the Dalit and Adivasi groups who have worked closely with their communities in addressing atrocities in the form of physical violence and untouchability based on discrimination. It provides a critical space for recording and documentation, and for analysis and reflection.”

Told directly from victims, witnesses, community members, human rights defenders and public officials, the report analyzes over 400 atrocity cases, with 20 in-depth case studies covering atrocities such as murder, rape, mass attack, and land grabbing. The study identifies best practices undertaken by CSOs in ensuring positive outcomes for Dalit and Tribal communities and offers recommendations to strengthen CSO interventions. Jayshree Satpute, a Director of Nazdeek, states, “Claiming Justice is the first report of its kind, and documents the tireless, often dangerous work of frontline human rights defenders in supporting victims of atrocities. From taking a tiered approach to advocacy to building community-level networks and supporting victims from the filing of complaints to obtaining of judgment, the CSOs play a critical role in fighting against the pressure to compromise and demanding justice for victims and their families.”

To increase state accountability and increase access to justice in atrocity cases, NDMJ has also launched an interactive online Atrocity Tracking and Monitoring System (ATM) which creates triggers and alerts via emails and messages to stakeholders responsible for monitoring atrocity cases. The ATM was launched by Honorable Justice K.G. Balakrishnan, Chairperson of the National Human Rights Commission, India.