A new report finds that Dalit girls in India’s garment industry live in hostels, with little freedom of movement, are underpaid for long working-days and working under hazardous conditions. 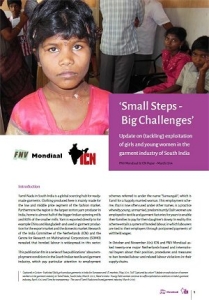 Press Release from the India Committee on the Netherlands:

Garment brands not transparent on tackling bonded labour in India

Most Dutch and international companies importing garments from the South Indian state of Tamil Nadu refuse to be transparent about if and how they tackle bonded labour at their suppliers. An estimated 100,000 young children and teenage girls are victims of ‘bonded labour’ or ‘modern slavery’. These girls – mostly Dalit (‘outcaste’) – live in hostels, with little freedom of movement, underpaid for long working-days and working under unhealthy conditions.

This is an important conclusion of the paper Small Steps, Big Challenges – Update on (tackling) exploitation of girls and young women in the garment supply chain of South India that FNV Mondiaal (international department of Dutch trade union confederation) and the India Committee of the Netherlands have just published. The report discusses the current situation in Tamil Nadu, the limited improvements after previous reports and the responses of 21 Dutch and international garment brands on the question of what they do to combat the abuses. It also discusses the activities of various joint initiatives by companies and other organisations.

Of the 21 garment companies approached only 8 have responded. These were HEMA (Dutch), Impala Loft (Germany), O’Neill Europe, Migros (Switzerland) PVH/Tommy Hilfiger Europe, Scotch and Soda (Dutch), Van den Broek (Dutch) and Zeeman (Dutch). Companies that were contacted but have not reacted at all are Abercombie & Fitch (USA), Carodel (Belgium), Crew Clothing (UK), IKEA NL, LPP (Poland), Kiddo Fashion (Dutch), Teidem (Dutch), Sorbo Fashion (Dutch), TDP Textiles (UK), Tumble ‘N Dry (Dutch)and Walmart (USA).
Six companies acknowledge that violations of labour rights take place in Tamil Nadu, but only PVH/Tommy Hilfiger and Migros admit that bonded labour – in the form of the Sumangali Scheme (see below) – existed in their production chain. HEMA states it cannot share the information, but nevertheless emphasizes the importance of supply chain transparency. Apart from that, none of the contacted companies publish their list of suppliers, like e.g. Nike, Patagonia and H&M do. Nor did any of these companies consult relevant local organizations in India.

A major obstacle in the mapping of and research on Sumangali or related violations of labour rights is that most companies only monitor their first tier supplier. However, most violations take place further down the production chain, especially in the spinning mills. Only Tommy Hilfiger and O’Neill say they are monitoring further down their supply chain.

Indian newspapers regularly report on abuses in Indian spinning mills and garment factories:
“On 14 October 2013, 47 young labourers, the majority of them women and young girls, were rescued by local officials and NGOs from the P.V. Spinning Mill in Erode district in Tamil Nadu. This happened after two girls escaped and reported to the district administration that workers suffered in the mill as bonded labourers, with 12 hours working days and poor food. Local organisations reported that forced overtime, deprivation of proper food and bad treatment by the mill management were common working conditions in the mill.” (Times of India, The Hindu and other newspapers).

The bonded labour takes place mainly under the so-called Sumangali Scheme, whereby young unmarried women are working in textile mills to save money for their dowry. This means in practice that they only get paid a large part of their (low) wage if they serve out a contract of 3 to 5 years. Under the pressure of criticism new ways are now devised to ‘bind’ the girls. Companies e.g. keep in their own account the contributions to a compulsory social security fund for employers and employees until the end of the contract period, instead of paying it to the designated public agency.

The non-governmental organization READ in Tamil Nadu combats the Sumangali Scheme with a specific focus on girls from the Arunthatiyar sub-caste, the ‘Dalits among the Dalits’. Almost 60% of the girls working under the Scheme or similar arrangements are Dalits, of whom many belong to the Arunthatiyar. READ has noted that Dalit girls face specific forms of discrimination: while recruiting workers, in the factory hostels as well as on the work floor. READ finds that the rooms in the hostels are allotted ‘community wise’ and that Dalit girls are taunted if they complain about their situation like lack of lightning or water (‘you are used to these comforts, so why do you complain’). Also Dalit girls are forced to do extra work during night shifts. All the heavy work like carding, waste and cone cleaning are given to Dalit girls, while easier work like counting and checking is given to non-Dalit girls.

As a result of previous publications and campaigns – both in India and internationally – some improvements have been put in place at most of the previously investigated major suppliers. These suppliers are Eastman Exports Global Clothing, K.P.R. Mill and SSM India. In these companies civil society organisations did get access to monitor the production units and to train employees and management on labour rights. In K.P.R. Mill wages are now transferred to the bank accounts of employees, workers have an identity card, parents are allowed to visit weekly, and the girls can occasionally visit their homes.

In the past few years also several initiatives have been undertaken by companies and other stakeholders to eradicate Sumangali. Of this initiatives the Tamil Nadu Multi-Stakeholder Group (TNMS) of the Ethical Trading Initiative is the most specific. The program began in 2011/12 and has a number of working areas: ethical recruitment (including shortening the apprentice period from 3 years to 6 months), health programs and informing and supporting workers to claim their rights. Most activities have yet to start. Local civil society organizations claim that they are not sufficiently involved in the development of the program. The Business Social Compliance Initiative – a business-driven CSR initiative with a membership of 1,200 companies including some garment companies discussed in the paper – encourages its members importing from South India to join the TNMS Group. BSCI recently redefined its position to the Sumangali Scheme again. First Sumangali was called a ‘cultural practice’, now BSCI ‘does not endorse Sumangali under any guise’.

Recommendations
FNV Mondiaal and the India Committee of The Netherlands present the following recommendations to companies to combat Sumangali and similar abuses: