A landmark judgement in the fight to eradicate manual scavenging 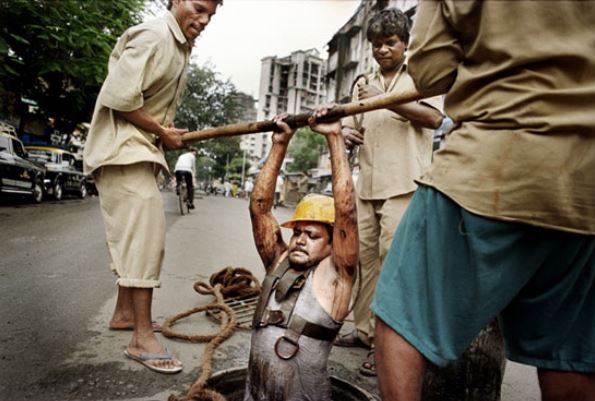 The Indian Supreme Court has ruled that the continuance of manual scavenging in the country is in blatant violation of Article 17 of the Constitution of India by which, “untouchability is abolished and its practice in any form is forbidden”. The court was emphatic about the duty cast on all states and union territories “to fully implement the law and to take action against the violators”. 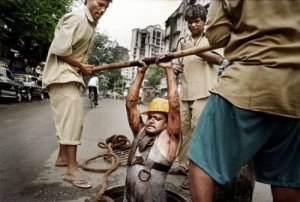 The judgement was particularly clear on compensation and rehabilitation in relation to manual scavenging. For example, the Supreme Court directed the government to, “Identify the families of all persons who have died in sewerage work (manholes, septic tanks) since 1993 and award compensation of Rs.10 lakhs for each such death to the family members depending on them”. Dalit sewerage workers are rarely provided protective gear when being lowered into the sewers and sometimes die from inhaling the gases.

(a) Sewer deaths – entering sewer lines without safety gears should be made a crime even in emergency situations. For each such death, compensation of Rs. 10 lakhs should be given to the family of the deceased.

(b) Railways– should take time bound strategy to end manual scavenging on the tracks.

(c) Persons released from manual scavenging should not have to cross hurdles to receive what is their legitimate due under the law.

(d) Provide support for dignified livelihood to safai karamchari women in accordance with their choice of livelihood schemes.

The court also directed the Indian Railways, which is the largest employer of manual scavengers in the country, to take time bound strategy to end manual scavenging on the tracks…

The court acknowledged the significance of the data provided by the petitioner Safai Karmachari Andolan, who filed the Writ Petition, “that the practice of manual scavenging continues unabated. Dry latrines continue to exist notwithstanding the fact that the 1993 Act was in force for nearly two decades. States have acted in denial of the 1993 Act and the constitutional mandate to abolish untouchability.”

It is estimated that around 1.3 million Dalits in India, mostly women, make their living through manual scavenging – a term used to describe the job of removing human excrement from dry toilets and sewers using basic tools such as thin boards, buckets and baskets, lined with sacking, carried on the head.

The Supreme Court judgement underscores of some of the key issues that organisations working to eradicate manual scavenging such as the Safai Karmachari Andolan (SKA) as well as organisations fighting for Dalit rights, have been raising at local, national and international level for years.

National convenor of Safai Karamchari Andolan Bezwada Wilson said that,“this is a victory of manual scavengers who have been fighting across the country for their liberation against the denial of central and various state governments repeatedly.”

(This article is based on a Press Release from SKA)

Read the full Writ Petition – SKA vs. the Union of India – on manual scavenging