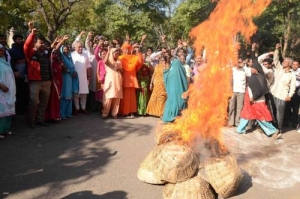 According to the National Campaign for Dignity and Elimination of Manual Scavenging (Rashtriya Garima Abhiyan), the new legislation states that manual scavengers must be rehabilitated but the rules are not providing specific provisions for the form of rehabilitation.  At some points the rules also counteract with the goal of total eradication of manual scavenging by prescribing what safety equipment should be used in carrying out manual scavenging. Provisions for cash assistance and other rehabilitation plans are not properly specified and risk not being implemented. No clear and concrete provisions have been provided in the draft rules for the enforcement of the law in government institutions like the Indian Railways, a major employer of manual scavengers. Also, manual scavengers who have stopped before the passing of the law are not covered by the new rules and it is unknown whether Muslim or Christian scavengers are covered by the rules. The rules are also gender blind and do not focus properly on caste as a pivotal part of the issue of manual scavenging.

The Campaign has therefore redrafted the rules so that they adequately address these points and are hoping that the Ministry of Social Justice and Empowerment will redraft the final legislation accordingly.

Manual scavenging is a caste-based and hereditary occupation that involves hundreds of thousands of mostly Dalit women. They remove human excrement from dry toilets using basic tools such as thin boards, buckets and baskets, lined with sacking and carried on the head. The term now also covers sewage workers who carry out their work in dangerous conditions without any protection. There is no disputing the fact that this legislation is absolutely necessary.

In recent years, the practice has come under scrutiny from international human rights bodies. The UN High Commissioner for Human Rights, Navi Pillay, has called manual scavenging “a deeply unhealthy, unsavoury and undignified job forced upon these people because of the stigma attached to their caste.” National and international media have also repeatedly reported on this issue. Most recently the Guardian has published the article India’s human-waste gatherers seek a better life and a number of case studies on manual scavengers.

Draft Rules on Manual Scavenging proposed by the Ministry