Dalits in India have had enough of clever Government tricks to divert money meant for Dalits – under the Scheduled Caste Sub Plan – to other areas unrelated to them. They are demanding new legislation, to ensure that this practice, which has prevailed for years, is stopped and money is returned to the scheduled castes that were meant to benefit from them. 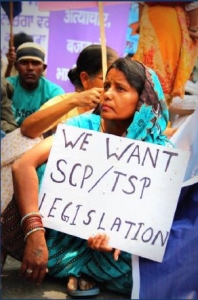 Several initiatives to focus on budget allocations for Dalits in India have taken place in November, including the launch of the campaign “Sau Mein Pachees Haq Hamara“, to demand the Dalit share of the budgets and improve legislation. A National Conference on Reframing Budgets for Dalit Women in India, defining the agenda of Dalit Women in the Scheduled Caste Sub Plan (SCSP), has also been held.

The Campaign, organised by the National Coalition on SCP TSP Legislation (NACSTL) will run from the 5thDecember and culminate on Human Rights Day, the 10th December. Activists will gather at New Delhi’s Jantar Mantar Square and demand proper legislation to ensure implementation of the rights of Dalits. The campaign will also draw specific attention to Dalit children and women, land and livelihood rights and labour rights.

Despite the fact that Indian Government have just drafted an updated version of the SCP TSP legislation, meant to address previous deficiencies, Dalit activist are criticising the new attempt for not being based on a proper analysis of the gaps and therefore not adequately addressing the problems.

“The SCSP Bill 2013 perhaps has the right intentions but without an accurate analysis of the gaps that it aims to address, it will seem like mere charity done for the poor and marginalized SCs of India. Well meaning legislations like the SCSP should aim at bringing in structural changes. On the contrary the nasty truth is that the ‘benevolence’ of the budgets provided by the Indian state for development of Scheduled Castes in India has suffered from massive diversion and pilferage both at the stage of allocations and implementation,” says Asha Kowtal, Convenor of All India Dalit Mahila Adhikar Manch (AIDMAM – Women’s branch of NCDHR), in an insightful interview on India’s special legislation.

Several networks, movements, SC/ST associations and campaigns are strongly involved in taking this demand for more adequate SCP TSP Legislation forward through the “Sau Mein Pachees Haq Hamara” campaign. The movement has previously gained important successes at state level in relation to budget allocations and implementation and now hope that this can be transferred to the national level.

Status of the SCP TSP and the Draft SCP TSP legislation

Interview with Asha Kowtal on Special Legislation in India

IDSN News from May 2012 on previous diversion of funds