This year’s UN Forum on Minority Issues on 26-27 November focused on the rights of religious minorities, an issue of much relevance to Dalits in Pakistan and India. A Dalit representative from the latter country made an intervention in association with IDSN. 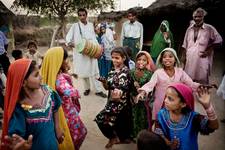 Dalit girls in Pakistan face discrimination because of their religion, caste and gender. Photo: Jakob Carlsen

Dalit Christians and Dalit Muslims in India lack access to legal protection, job quotas and other rights that are, at least on paper, enjoyed by Dalits from other religious communities. The absence of entitlements for these two groups is a violation of international human rights law.

This was the theme of an intervention by Dalit human rights advocate Savio Mahimaidass at the sixth UN Forum on Minority Issues in Geneva earlier this week. Savio’s speech on the situation of Dalit religious minorities in his native India as well as Pakistan was presented in association with IDSN.

“In Pakistan, the so-called low caste Hindus (Dalits), officially known as Scheduled Castes, are the worst victims of discrimination and violence. They are in a dual disadvantageous position as they are Hindu by religion, a minority in a Muslim majority, and also of the lower castes within the Hindu population,“ he said.

Speaking of the lack of rights of Dalit Christians and Muslims in India, Savio noted that the Presidential Order of 1950 that prevents these groups from receiving entitlements is, in fact, unconstitutional. He urged the Government of India to revoke it.

Prior to the Forum, the Pakistan Dalit Solidarity Network (PDSN) prepared a short briefing paper on the situation of religious minorities in that country. The paper contained a number of recommendations, including a call for the State to “put in place effective mechanisms to stop violence against religious minorities.” It also stated that caste discrimination should be declared a crime.

The UN Forum on Minority Issues has been held annually since 2008. At this year’s session, more than 500 participants from all over the world discussed key issues facing religious minorities. The event was organised by the Independent Expert on minority issues, Rita Izsák, and a set of recommendations from the session will be presented to the UN Human Rights Council in March next year.