Dalit women from Nepal, India and Bangladesh joined hands to assert their rights at a rally in Kathmandu, at the fringes of the people’s SAARC meeting. Hundreds of Dalit women from across Nepal gathered at the FEDO National Dalit Women conference, to put Dalit women’s rights on the agenda and In India several long marches and mass gatherings of Dalit women took place throughout November and December. 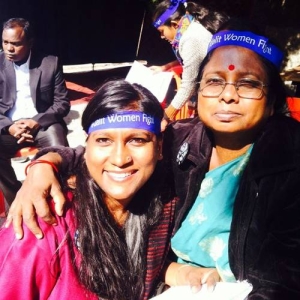 “Herstory in the making as Dalit women from Nepal, Bangladesh, Pakistan, and India join at People’s SAARC!” tweeted Thenmozhi Soundararajan, a Dalit woman from the US who had joined Dalit women from across South Asia for events to demand their rights at the fringes of the SAARC meeting in Nepal.

Ms. Soundararajan, a filmmaker and activist, had just come out of a month long march for Dalit women’s self-respect in India, organised by the National Dalit Women’s movement AIDMAM. The march, the second of its kind this year, had travelled through Madhya Pradesh, a state plagued by rampant caste and gender discrimination, to support Dalit women victims of violence in claiming their rights.

The march also focused on creating awareness around institutionalized caste discrimination in state mechanisms, police and the judiciary, to start to address what is a major obstacle to Dalit women in claiming their rights. The organisers have also put together a photo story to give a snapshot of events and the engagement and vigour of the Dalit women who participated.

Initiatives for Dalit women’s rights in Madhya Pradesh have also been undertaken by NACDOR this autumn, who have been working together with local grassroots organisations to create rights awareness and build the agency of Dalit women in the state.

In Gujarat a rally for women’s rights with a prominent focus on Dalit women is also taking place, organised by the Women’s Rights Council and led by the Executive Director of the NGO Navsarjan and IDSN board member, Manjula Pradeep. The rally started on the 25th November and will cover 614 villages, enrolling women in the Women’s Rights Council to support awareness of their rights and the agency to claim them.

In Nepal, The Feminist Dalit Organisation (FEDO) gathered hundreds of Dalit women from across the country for a National Dalit Women’s Conference with presentations by multiple stakeholders including the government, UN Women, researchers, IDSN and Dalit representatives. .

Dalit women leaders and activists from India, Nepal and Bangladesh came together in Nepal for the People’s SAARC and are forming strong links to take their struggle forward at a regional and international level as well as at the national level.

Hundreds of Dalit women gather for a conference in Nepal

Article on the Dalit Women’s March in Gujarat