Speaking at the Indian Council of World Affairs UN Secretary-General Ban Ki-moon stressed the need for inclusive growth for shared prosperity saying that, “millions of Dalits, Tribals and others still face discrimination, especially the women and girls.” On a visit to Gujarat the World Bank President Jim Yong Kim, similarly cautioned that while India was an accelerating economy, “Indian society has an enduring exclusion that is based, among other things, on caste identities. This bias can impede shared prosperity, serving as a basis for discrimination in many spheres, including in employment and other markets, as well as in public services.” 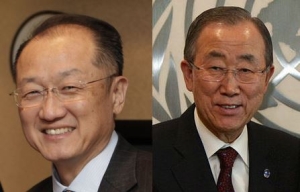 The reference to caste in both of these high-level speeches is of great significance, as 200 million Dalits in India continue to suffer discrimination and infringement of their basic rights, impeding their opportunities to take part in India’s growth and progress. Tackling India’s serious problems with violence and discrimination against women, was also a key point in both speeches.

Ban Ki-moon spoke of the historical efforts to ban caste-based discrimination and the need to focus on inclusive growth – in order to bring shared prosperity.

“The government is well aware of this. Its special allocation to a fund for entrepreneurs from among the Scheduled Castes, and its focus on fixing bottlenecks so that money earmarked for the Scheduled Tribes reaches them, are both ethically just and economically sound responses.”

However, with regard to the funds earmarked for Dalits (Scheduled Castes), the state administration of these funds has been far from convincing as an estimated 60% of funding earmarked for scheduled castes and scheduled tribes has consistently been diverted to cover unrelated budget posts, by consecutive Governments.

Over the years the National Campaign on Dalit Human Rights (NCDHR) as part of the National Coalition on SCP TSP Legislation (NACSTL), has campaigned to stop this diversion of funds, meant to alleviate poverty and exclusion for India’s most marginalised. Thus far the diversion continues and the NACSTL are currently holding pre-budget talks with the Minister of Finance to urge him to address this issue urgently with regards to 2015-16 budgets.

“Dr. King fought for civil rights in the United States and justice for the poor around the world. He showed us that, in order to bring about historic change, we must ourselves forcefully bend the arc of history toward justice … Indeed, of all the things to “Make in India,” the most important for all of us is to make, right here, the very foundation for a world free of poverty.”

While India may be progressing in economic terms, true progress towards justice for all its citizens, including Dalits, is still falling dangerously short. It also remains to be seen whether the Government reassurances that they will tackle bottlenecks short-changing Dalits of the funds allocated to them, will in fact translate into action and accountability.

In relation to the World Bank’s concern over the persistence of caste-based discrimination, IDSN have noted that in a joint letter to the World Bank President in December, 27 UN Special Rapporteurs have raised grave concern that vulnerable and marginalised groups remain “virtually unprotected in World Bank projects.” As the World Bank is currently in the process of reviewing its Safeguard Policies Document, IDSN urges that groups affected by caste-based discrimination are specifically mentioned in the final document.