The new report ‘Cotton’s Forgotten Children’, released by the Stop Child Labour Campaign and the India Committee on the Netherlands (ICN), finds that almost half a million children in India work as child labourers in the cottonseed production industry. Most of them are Dalits, Adivasis or other low caste children (OBCs). The report warns that most of these children are not in school and are subjected to hazardous work and harmful chemicals. 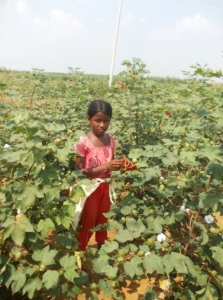 The report also finds that workers are paid far below minimum wages and are often working to repay their parents debts. The children are made to work 8-12 hours a day. Most are school drop-outs and those who do attend school in the off season struggle to keep up with their school work. Two thirds of the children are girls, who are also found to receive lower wages than the boys. It is furthermore found that around 70% of the children are hired or trafficked from other states. As previously documented in reports on child labour in India, Dalits and other minority groups in India are particularly vulnerable to labour exploitation due to the multiple discrimination against them.

The report, covering Andhra Pradesh, Gujarat, Rajasthan, Karnataka and Tamil Nadu, finds an increase in the number of children working in child labour in the cotton-seed industry while finding a slight decline in the amount of child labour in the industry, relative to the size of the industry. The increase in the amount of workers is due to rapid growth in the cottonseed industry in India, while the report stipulates that the relative decline in child labour may be due to an increased awareness following campaigns. Nonetheless, the report finds the problem alarming and detrimental to the children involved.

The report has detailed statistics from each state and offers a number of concrete recommendations to help combat child labour in India’s cotton-see industry.

The recommendations include companies monitoring all links in their supply chain for child labour and the payment of minimum wages to employees; knowledge sharing across companies to help end child labour; urging the Government to take action to ensure the minimum wage and live up to the ‘duty to protect’; ensuring effective grievance mechanisms and addressing the many interlinked issues.

Summary of a case study from the report on a young Dalit girl working in the cottonseed industry:

Yadamma, a 14 year old girl, hails from a Dalit agricultural labour family in a remote village in Andhra Pradesh. She has been working in the cottonseed fields for the last three years and does not go to school.

Two years ago Yadamma`s mother took a loan of Rs 8000 from a cotton seed farmer pledging the labour of Yadamma to meet the medical expenses because of the illness of her husband. Since then Yadamma is working with the same employer.

In the field she is entrusted with the tasks such as cross-pollination, sowing, weeding, harvesting and the application of fertilisers. Cross-pollination is the main activity she is involved in most of the time. During cross pollination time she works about 10-12 hours a day and is paid a monthly wage of Rs. 4500.

Yadamma had a serious health problem during the last working season because of heavy exposure to pesticides sprayed in the fields where she was working. While doing the work in the field she got serious headaches and felt giddy. At some point she fainted and became unconscious. She was taken to the local doctor and given treatment.

Recalling the incident Yadamma said that ‘’I am very allergic to the pesticide smell. I do occasionally get headaches and feel giddiness whenever pesticides are sprayed in the field. In the past whenever I had these problems I used to complain to my employer. He used to suggest me to take rest for few hours under the tree in the field. But that day I had a severe headache which was not normal. We were four children working on that day. Due to heavy pest problem pesticides were sprayed in our field almost continuously with a five or six days gap. Because of the smell of pesticides two other children also had the same problem. When we complained to our employer he asked us to take rest. We were walking towards the tree. I felt giddy and fell down. I became unconscious. My employer informed my mother and both of them took me to the doctor. The doctor gave some injections and tablets. My employer paid part of money for my medicines. It took me about eight days to recover and go to work again.’’

The local doctor Mr. Mallesh who treated Yadamma reported that ‘’it was a clear case of poisoning due to heavy inhalation of pesticides. I have treated her with `atcropine` which is used for pesticide poising cases. I have also given three bottles of Glucose water (given through injection). I have advised her to take rest for four or five days. I have also advised her not get exposed to pesticides and take precautions such as not to do any work while pesticides are sprayed, cover the nose and mouth if she has to work in the field after spraying pesticides, properly wash her hands with soap after doing the work and before eating anything’’.

Read the press release for the report