Dalit human rights defenders and UN experts raise concerns over intersectional caste and gender discrimination and its adverse impact on access to human rights, at the Dalit Women and Gender Justice side-event at the UN Human Rights Council’s 41st Session in Geneva.

On 25 June 2019, IDSN International Associate IMADR, and others organised a side-event during the 41st Session of the Human Rights Council, on Dalit women and gender justice. The panel was composed of Dubravka Simonovic, the UN Special Rapporteur on Violence against Women, Renu Sijapati, General Secretary of the Feminist Dalit Organization (FEDO-Nepal) and Abirami Jotheeswaran, from the National Dalit Movement for Justice-National Campaign on Dalit Human Rights (NDMJ-NCDHR). The event was moderated by Henri Tiphagne, from Peoples’ Watch, in India.

Watch the full video stream of the HRC41 side-event on Dalit Women and Gender Justice: 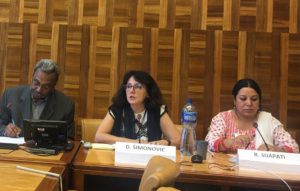 The UN Special Rapporteur on Violence Against Women, Dubravka Simonovic underscored that Dalit women face intersectional discrimination, on the grounds of gender and work and descent. Her rapporteurship has been focused on the gaps and responsibilities of the governments to prevent and address violence against women in this context. She illustrated her point with her official report on Nepal, after visiting the country last October. In that report, the rapporteur made specific recommendations to Nepal in order to implement the important constitutional and legislative modifications made in the country recently, so that the government recognises caste-based discrimination and addresses it.

“In Nepal there is good constitutional language on violence against women but on the other hand there is a huge implementation gap, we must focus on implementation and see how to look into concrete cases and look at how these can be addressed by my mandate and other UN mechanisms,” The UN expert said, “My suggestion for everyone trying to work to end caste and gender discrimination is to use all the UN mechanisms available to submit cases and concrete examples to.”

Ms. Simonovic also encouraged the establishment of a National Action Plan for violence against Dalit women.

“I am advocating for a specific National Action Plan to address violence against Dalit Women, and it is now important to raise those recommendations with the Government and national actors, to see how this can be implemented. I hope my recommendations will be used at the national level by the Government, NGOs, Human Rights institutions and the many UN agencies working in Nepal.” 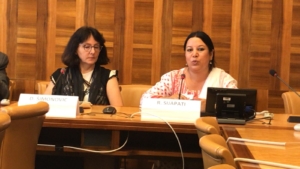 In Nepal, out of the total number of women raped, 20% are Dalits. Moreover, 80% of Dalit women and girls are killed after being raped. She called for increased action to address the extreme intersectional discrimination faced by Dalit women in Nepal who face abuse and violence at all levels of society and are not given access to justice or Government mechanisms.

Ms. Sijapati told the audience that prejudice and violence against Dalit women is particularly persistent within their own communities. Increased migration of Dalit women who flee their hometowns, due to oppression and lack of opportunities, aggravate their situation in large cities, in view of their lack of skills for decent work opportunities. 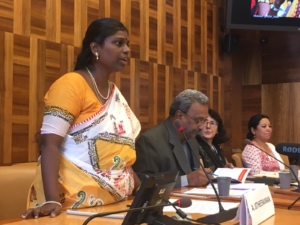 Abirami Jotheeswaran, from the National Dalit Movement for Justice-National Campaign on Dalit Human Rights (NDMJ-NCDHR) – India, echoed the concerns of Ms. Sijapati. India has passed several laws and regulations prohibiting caste-based discrimination, but implementation is the main challenge. In order to overcome this large implementation gap, there is a need to identify caste and gender sensitive advocates that help Dalit victims and survivors.

Similar to the situation in Nepal, 25% of women abused are Dalits and this figure keeps increasing. The Dalit community has been presenting information on these violations for the past 20 years to the international fora, like the UN, said Ms. Jotheeswaran stressing that,

Ms. Jotheeswaran explained that Dalit rights defenders are asking international bodies to extend solidarity to ensure that international mechanisms are pushing for the elimination of caste-based discrimination. 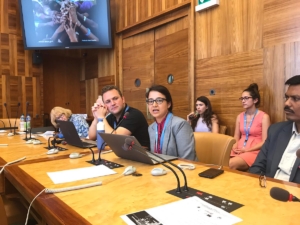 Following the presentations, the Second Secretary of the UN Mission of Nepal to the UN Human Rights Council, stated that Nepal was working on a large-scale legislative overhaul and was welcoming all input from Dalit women’s rights organisations. She commented that she is very proud of Nepal’s civil society and glad that the UN Special Rapporteur visited Nepal and has issued recommendations, and that Nepal is committed to working to end caste and gender discrimination through the use of relevant UN mechanisms.

Beena Pallical, General Secretary of the National Campaign on Dalit Human Rights (NCDHR-India), added reflections about other forms of violence against Dalit women from the floor, such as limited access to public water and sanitation. Women from Dalit communities that are engaged in manual scavenging often face the brunt of discrimination, Ms. Pallical said. Moreover, affirmative action for government positions is overrepresented at the local levels and underrepresented at regional and national levels. Ms. Pallical argued for the need to continue to build assets for Dalit women, ownership of property, land in name of women, policies on discrimination and to ensure that women are part of decision making at all levels. 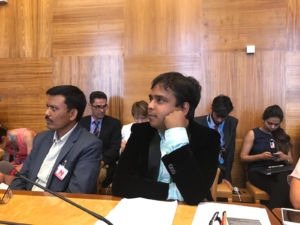 Ritwajit Das, a Dalit rights defender working on climate change, shared a positive case example of the Deccan Development Society, an organisation that promotes women-led regenerative agriculture and seed banks to empower Dalit women, which has won the prestigious UN Equator Prize 2019. His statement underscored that Dalit women are agents of change, within the spirit of the SDGs.

The side-event was organised by the International Movement Against All Forms of Discrimination and Racism (IMADR) and co-sponsored by Minority Rights Group International, Human Rights Watch, Anti-Slavery International, Lutheran World Federation, CIVICUS: World Alliance for Citizen Participation and Franciscans International.

The event was live-streamed by the human rights organisation RIDH with over 900 views and had very good attendance. Significant social media activity surrounded the event, including on Twitter and Facebook. The panelists subsequently also took part in meetings and dialogues at the Human Rights Council and an interview with Abirami Jotheeswaran was published by the site Feminism in India.

See some of the tweets from the event here:

3 minutes till the #HRC41 #NoCasteLeftBehind #CasteGenderJustice side-event kicks off in Geneva. Follow the live-stream at 14:30 CET on https://t.co/i0gieebOSW and tweet & share the statements from Dalit women and UN representatives on this crucial topic. #EndCasteDiscrimination https://t.co/e4rgtDJ0tk

Huge implementation gaps are highlighted by UN SR on VAW @DubravkaSRVAW as a key challenge to #CasteGenderJustice and the UN mechanisms must be used to make sure there is #NoCasteLeftBehind and we need specific national action plans to end violence against Dalit women from states pic.twitter.com/6MuUB6FeYm

Renu Sijapati from @fedonepal calls for increased action to address extreme multiple discrimination faced by Dalit women in Nepal who face abuse and violence at all levels in society & are not given access to justice or Govt. mechanisms. #NoCasteLeftBehind #CasteGenderJustice

Abirami Jotheeswaran from @dalitrights speaks about the lack of implementation of legal protective measures meant to stop rape and violence against Dalit women in India at the #NoCasteLeftBehind #CasteGenderJustice UN #HRC41 side-event asking for action for change pic.twitter.com/XK5fXRzhnu

Unsafe migrations due to poverty and most of them are from the Dalit community! They are most vulnerable to several factors of violence and lack of access @idsnupdates @Tiphagne @paulncdhr @rnathanva @dalitwomenfight

Spl rapporteur on violence against girls says” use the Cedaw and other mechanisms extensively “ @idsnupdates @dalitwomenfight pic.twitter.com/JQpmrQZT2J

“There have been absolute limited services for Dalit women to water and sanitation and the women from these communities engaged in manual scavenging have no protection and face the brunt of caste discrimination – with no options to exercise their power says @sitara1 from floor.

“Dalit women are agents of change and we must stand in solidarity with them” says Moderator @Tiphagne at the #NoCasteLeftBehind #CasteGenderJustice UN #HRC41 side-event pic.twitter.com/3jGjTNttWH

The Second Secretary of the Mission of Nepal says she is very proud of Nepal’s civil society and is committed to working to end caste- and gender discrimination and use all UN mechanisms available to further this goal- speaking at the UN #HRC41 #NoCasteLeftBehind event @MofaNepal pic.twitter.com/PtQKShBe8D

Effective implementation of all the progressive legislation like bonded labour, Prewventuon of Atrocities act & appeal to all international agencies to ensure recommendations to address violence against Dalit women @idsnupdates @Tiphagne pic.twitter.com/uCDEzmFGgX

Laws are not sufficient in the case of caste and gender based violence, the laws need to be integrated with social services, education, prevention, & addressing & we must see implementation thoughout the justice system –@DubravkaSRVAW at the #HRC41 #CasteGenderJustice side-event pic.twitter.com/m80ZdkE7Ve

Shared the stories of #Dalitwomen of Deccan Development Society 🇮🇳 on winning the coveted #UN #award the #EquatorPrize at #UNHRC19 in #Geneva for outstanding e.g. of local #Nature based solution to #climatechange & #sustainabledevelopment ✊✊🍀 @jamisonervin @idsnupdates @UNDP pic.twitter.com/dUwdaMkNBw

Excellent intervention from @Ritwajit to highlight what #Dalit women can achieve as equator prize winners have shown pic.twitter.com/gmwlZo1G6L

Don’t miss this interview on caste, violence and human rights with Human Rights activist Abirami Jotheeswaran of @dalitrightshttps://t.co/SpVopj3FKc you can also see Abirami on the panel of the #NoCasteLeftBehind #CasteGenderJustice side-event here https://t.co/fO4eEUGprM pic.twitter.com/zE8xNv0r81