The third week of March 2016 was an eventful one for IDSN. The network’s highest body assembled in Geneva, the UN Special Rapporteur on Minority Issues presented a ground-breaking report on caste discrimination, and IDSN members met a number of high-ranking UN officials. 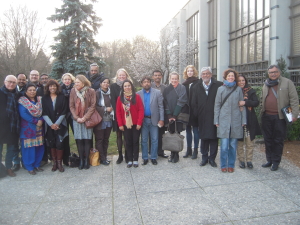 On 14 March 2016, IDSN members from all over the world gathered in Geneva for the network’s triennial General Assembly. Participants were Dalit human rights defenders from South Asia, Dalit Solidarity Networks from Europe, International Associates and staff from the IDSN Secretariat.

The General Assembly is IDSN’s highest body. It elects the network’s board and is also an important forum for information exchange. At this meeting, IDSN members stressed their strong determination to continue the global struggle against caste discrimination which has taken some important steps forward in recent years.

Following the General Assembly, IDSN members embarked on a few intense days of lobbying at the UN Human Rights Council in Geneva. They met with the UN Deputy High Commissioner for Human Rights, Kate Gilmore, the UN Special Rapporteur on minority issues, Ritz Izsák-Ndiaye, and other UN officials.

Ms Izsak-Ndiaye’s ground-breaking report on ‘Minorities and caste-based discrimination’ became the focal point of the week’s activities. She presented it at the interactive dialogue with members of the HRC on 15 March. Several delegates – including those from Switzerland, Norway and Nigeria – voiced strong support for the report, while India continued its recalcitrant stand, refusing to accept that caste discrimination constitutes a minority issue.

The following day, the OHCHR hosted a side event on minorities and caste-based discrimination, featuring the Special Rapporteur as well as a number of experts from different countries and regions, including Asia, Africa and the Middle East. The discussions were lively and productive and highlighted the global nature of caste discrimination.

IDSN representatives also took part in the EU-CSO conference in Brussels on 17-18 March. The meeting was attended by more than 800 participants, and caste discrimination was raised in several discussion fora. IDSN board member Henri Tiphagne, Director of Peoples Watch-India, addressed the closing session with a strongly worded statement on the rapidly shrinking democratic space in India and ingrained caste discrimination. He challenged the EU to support human rights defenders more effectively and step up policy dialogue with India.

Caste was also noted as a challenge in the Declaration issued by High Representative Federica Mogherini on behalf of the European Union on the International Day for the Elimination of Racial Discrimination, 21 March 2016.

Report on caste discrimination by the Special Rapporteur on Minority Issues

Minorities and caste-based discrimination (IDSN report from side event)