On the eve of today’s EU-India Summit, Human Rights Watch has written a letter to the EU addressing numerous key human rights issues. These include the failure of the Indian government to protect the country’s Dalit population. 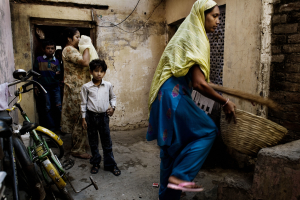 The European Union should encourage the Indian government to: take immediate steps to eliminate abuses against Dalits; provide concrete plans to implement laws to secure their protection; and uphold its commitment to end manual scavenging.

These are the most important caste-related messages in an open letter regarding the EU-India Summit from Human Rights Watch (HRW) to EU leaders Donald Tusk and Jean-Claude Juncker. The comprehensive letter to the respective Presidents of the European Council and the European Commission addresses numerous key human rights issues. It was published on 29 March prior to today’s summit between the EU and India.

HRW notes that the Indian government continues to “fail to implement policies to protect Dalits (so-called “untouchables”) and tribal groups from discrimination and violence.” The organisation adds that Dalit school children suffer high dropout rates due to caste discrimination and often end up being subjected to the worst forms of child labour and early marriage.

The letter also mentions the recent report on caste-based discrimination by the UN Special Rapporteur on minority issues. According to the report, caste-affected groups continue to suffer exclusion, dehumanisation and increased violence. The report also notes that the caste-designated practice of manual scavenging continues despite being prohibited. The letter refers to research carried out by Human Rights Watch which points out that governments and municipalities actually employ manual scavengers.

HRW also urges the EU and its member states to follow the 2012 European Parliament resolution on caste discrimination in India which calls for them to include the issue “in their dialogues with the Indian authorities, and to prioritize programs addressing caste discrimination, including in education, and programs with particular focus on women and girls. The resolution also expects future EU cooperation with India to be assessed as to how it would affect caste discrimination.”

The letter covers a lot of other serious human rights issues in India that are also relevant to Dalits, including attacks on free speech, impunity for human rights abuses and the need to reform the country’s labour laws. It also describes India as “a weak proponent of human rights at the UN” and calls on the EU to encourage India to “play a more positive role on behalf of international human rights and stand by victims of abuses, instead of protecting repressive governments from international scrutiny.”

The EU-India Summit takes place today in Brussels and is expected to focus on trade and investment issues. The Indian delegation is led by Prime Minister Narendra Modi.

The Wire: What’s on the table for Modi’s visit to Brussels