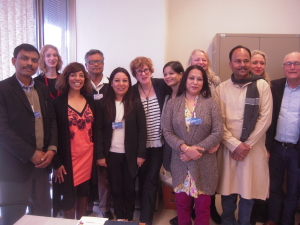 The UN Deputy High Commissioner for Human Rights, Kate Gilmore, has reiterated her office’s strong commitment to addressing caste discrimination as an important priority in its work.

In a meeting in Geneva on 16 March with Dalit human rights campaigners from India, Pakistan, Bangladesh and Nepal as well as other members of the International Dalit Solidarity Network, Ms Gilmore described caste discrimination as “a grave concern” for the Office of the High Commissioner for Human Rights (OHCHR).

During the meeting, Dalit leaders gave testimonies about the situation in their respective countries. Among them were Manjula Pradeep, Executive Director of the Indian human rights NGO, Navsarjan, who outlined a number of key issues in the struggle for Dalit rights. These include a high level of violence against Dalits and the ensuing impunity for human rights violations against them, multiple forms of discrimination against Dalit women and limited access for Dalits to resources, development, health and education.

Ms Gilmore suggested that the Sustainable Development Goals could open up new opportunities to work on the anti-discrimination agenda across the whole UN system.

On the same day the visiting Dalit human rights defenders spoke at a side event on ‘Minorities and Caste-based Discrimination’, featuring the UN Special Rapporteur on minority issues, Rita Izsàk-Ndiaye, who has devoted her most recent report to caste discrimination.

The OHCHR has been a strong supporter of the struggle against caste discrimination for several years. The previous High Commissioner, Navi Pillay, made numerous statements on caste discrimination, and her successor, Zeid Ra’ad Al Hussein, has continued to address this important human rights issue.