For the past four months, activists have criss-crossed India to protest against manual scavenging. Their march – the Bhim Yatra – concludes in New Delhi tomorrow, on the eve of the 125th birthday of the great Dalit leader, Dr Ambedkar. 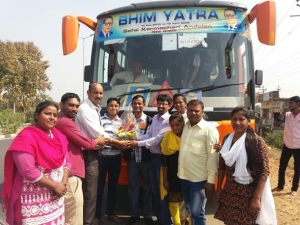 Activists during the Bhim Yatra which has taken them across the country for 125 days. Photo: SKA

Their message is clear: ‘Stop killing us’ – in dry latrines, sewers and septic tanks. A group of activist representing the manual scavenging community have carried this message across India since December, and on their way they have given hope to people involved in this inhuman and illegal practice and informed them of their rights.

The activists – from the anti-scavenging movement Safai Karmachari Andolan (SKA) – launched the Bhim Yatra in December and have since visited 500 districts in 30 states. They have covered more than 35,000 kilometres, talked to thousands of ordinary people and raised the issue with political leaders, including President Pranab Mukherjee. A civil society delegation met him on 18 March and demanded an “immediate end to the practice of manual scavenging and sewage deaths.”

Manual scavenging is banned, but nevertheless continues all over India, often with the consent or even encouragement of the authorities. Hundreds of thousands of mainly Dalit women are forced to clean human excreta with their bare hands. Other hundreds of thousands, mostly Dalit men, clean sewers under deadly conditions. SKA estimates that 1200 die every year.

“Is it because Dalits are into manual scavenging, the government is not serious about their rehabilitation. Had members of other castes been involved, some solution would have surely been found,” Dr Bezwada Wilson, National Convenor of SKA, said in a recent interview with The Tribune.

The Yatra – described by SKA as a “journey of pain and anguish” – reaches New Delhi today and concludes in the capital tomorrow, coinciding with the 125th birth anniversary the following day of Dr. Ambedkar, who urged his fellow Dalits to “leave the broom, clasp the pen.” At the final meeting, 125 families from all over India will speak out on the painful subject of sewer deaths.

“We didn’t want to celebrate it with the usual garlanding of his idol. We thought the best way to celebrate Babasaheb would be to bring his vision to the people and make people aware of their rights,” Dr Wilson told Catch News during the Bhim Yatra.

Bhim Yatra: a bus full of hope for the manual scavenger (Catch News)

SOS: Get us out of the gutter (The Tribune)