Almost three months have passed since the tragic suicide of Dalit PhD-student Rohith Vemula, but his untimely death continues to attract national and international attention. 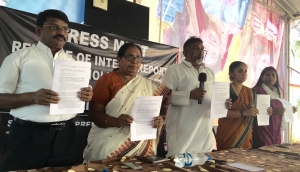 On 22 March, student demonstrators at Hyderabad Central University were violently attacked by police who forcefully detained 29 protesters, brutally beat them and held them in undisclosed locations for more than 24 hours. During the clashes, female students were kicked and threatened with rape.

These were among the findings of an independent team of human rights defenders – including leading Dalit activists – who visited the university campus following the incident. The fact-finding team was highly critical towards the way the authorities handled the protests by students who were upset by the reinstatement of the University’s controversial Vice Chancellor, Appa Rao.

Dr Rao is widely accused of being co-responsible for the death of Dalit PhD-student Rohith Vemula who committed suicide on 17 January. A few days after the tragedy, a judicial enquiry was launched against the Vice-Chancellor who then went on leave. It was his return to the University that sparked the protests and the crackdown by the authorities.

“What kind of a country treats its students in this manner? A person accused of a crime under the SC/ST PoA Act assumes public office and the students are deprived of food, water, and basic facilities and live under siege with constant threats. Is this the real face of shining India?” remarked one of the members of the fact-finding team, Asha Kowtal of the Dalit women’s rights organization AIDMAM.

A group of 300 international scholars, including prominent linguist Noam Chomsky, strongly condemned the “state violence and unlawful detention of faculty and student protesters”, voiced support for the students and called for the suspension of Appa Rao.

In an open statement, they expressed concern about “the pattern of the growing nexus between student vigilante groups, youth wing of the ruling party (BJP), state and university authorities in colleges and university campuses across the country in order to mobilize the state machinery against vulnerable students. This has created a climate of fear and oppression in the country.”

Rohith Vemula was an activist who fought for the rights of Dalit and other marginalised students. He had been suspended by the university following an incident involving supporters of India’s ruling BJP party. His suicide is widely seen as a consequence of the often hidden discrimination that Dalits suffer on university campuses and the oppression they face if they try to assert their rights.

Since Rohith’s death, there have been nationwide student protests in India. They have brought together Dalit and leftwing groups, who do not always see eye to eye, but have managed to unite in order to “fight for the marginalised” and claim “justice for Rohith”. These protesters are opposed by the authorities as well as Hindu nationalist student groups. The universities have become battlegrounds for national politics.

The statement notes that the protests have “pushed into the foreground public discussion and debate on the persistence of caste-based discrimination in educational institutions, and surveillance and suppression of dissent and intellectual debate in university spaces.”

Rohith Vemula’s suicide has created further international attention. At the 31st session of the UN Human Rights Council, Nitin Gangurde, a Dalit student activist, raised the issue at a debate on racism. There are also indications that the case will be discussed in the European Parliament as well as the House of Commons in the UK.

Urgent notes from a university in crisis (The Wire)

A Dalit’s suicide sparks protest in India (The Diplomat)