Today is the 125th anniversary of the birth of the legendary Dalit icon, Dr. B.R. Ambedkar. The event is marked across the world, although the legacy of this great man means different things to different people. 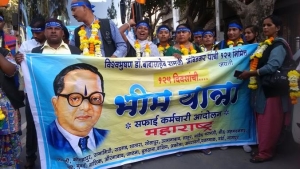 He is revered by India’s Dalit community as the man who campaigned against caste discrimination and inspired todays’ Dalit movement. Others primarily respect Dr. Bhimrao Ambedkar as an important architect of the Constitution of independent India. In the last few days, the 125th birthday of ‘Babasaheb’ has been celebrated across the globe.

Yesterday, the permanent mission of India to the United Nations hosted an event with a focus on “combating inequalities” to achieve the Sustainable Development Goals. In a number of countries, Indian embassies have been involved in organising other events to mark the anniversary.

A comment in the The Hindu newspaper describes the contrast between these celebrations and India’s refusal to discuss caste discrimination at the UN where the country recently criticised a report on the caste issue by the Special Rapporteur on minority issues.

“Ambedkar, the architect of the Indian Constitution, would definitely not be pleased. Nor are the Dalit rights activists in India and abroad,” the comment notes.

In India, political parties are competing to pay tribute to Dr. Ambedkar and claim his legacy. The ruling BJP-party highlights his allegedly nationalist views on the unity of the Indian nation, while the opposition Congress Party claims to be the true political heirs to Ambedkar.

For many Dalits, the attempt of non-Dalits to claim Dr. Ambedkar as one of their own appears somewhat hypocritical, but they will not let it spoil a day that is sacred to them. A statement from the Dalit umbrella group, NACDOR, expresses appreciation of the government’s “fanfare and enthusiasm” on this occasion, but adds:

“However, the Dalits and Adivasi communities and the followers of Dr. Bhimrao Ambedkar will judge the real intention of the government at least by the following actions at the minimum.” These proposed actions include the annihilation of the caste system and abolishment of “all related practices which are discriminatory, oppressive and humiliating.”

Others note that the Indian political elite may respect Dr. Ambedkar, but fails to protect the Dalit community. Prior to organising a march – Yatra – in honour of Ambedkar, Bezwada Wilson of the anti-manual scavenging movement, SKA, said the following words:

“The parliament held a discussion on “commitment to the constitution” to mark the 125 birth centenary of Dr. B.R. Ambedkar when they have utterly failed in protecting the constitutional rights of the manual scavengers. This is just empty rhetoric devoid of all meaning and purpose. It is a scandal and shame that such events are held within the sanctity of the Parliament.”

A first: UN to observe Ambedkar’s birth anniversary (The Hindu)

With eyes on Dalit votes, parties line up to celebrate Ambedkar (The Hindu)

How to be free of caste (The Hindu)