A rapid assessment report of the situation of Dalit communities, traditionally marginalised in Nepal, has found that Dalits are discriminated in the distribution of relief materials in Nepal, receiving less aid than the dominant castes and being allocated leftovers from castes that rank higher in Nepal’s caste system. 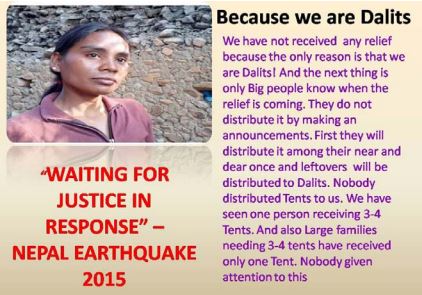 The  Waiting for Justice in Response: Report of Initial Findings from Immediate Needs Assessment and Monitoring Responses towards Affected Dalit Communities in Nepal Earthquake 2015 explores equitable access to rescue and relief provisions for Dalit communities in 37 villages in the 10 worst affected districts in Nepal. The Dalit Civil Society Massive Earthquake Victim Support and Coordination Committee, including members and advisors from 15 human rights and humanitarian civil society organisations, have released the report.

The assessment team conducted 65 focused group discussions  with villagers and 30 meetings with officials in the villages to assess the situation. Dalits shared their experiences of negligence and discrimination by rescue teams, mobilized by the Government, in detail with team members. Dalits are members of the lowest castes in Nepal’s caste stratified society, traditionally treated as ‘untouchables’. Official figures state that Dalits make up 13% of the population while NGOs estimate this to be 20%.

Based on the interviews conducted the team uncovered that 80% of the Dalits felt there has been wilful negligence and 60% said that they felt this was due to caste prejudice. 60% said that they had experienced discrimination in relief and rescue services in comparison to members of dominant castes. 65% were also found to believe that authorities had wilfully ignored bringing rescue and relief efforts to Dalit locations, as they were believed to have “nothing to lose”.

In reports from Gongambu, Nepal it was found that an international rescue team trying to rescue buried Dalit families from a collapsed house were taken by the Government to the next non-Dalit house. Another Dalit woman reported that due to being poor and a Dalit, police had ignored her when she was begging for help to retrieve her daughter who was buried under the rubble.

“We have not received relief because we are Dalits … only big people know when the relief is coming … first they distribute it among their near and dear ones and the leftovers will be distributed to Dalits,” said a Dalit woman interviewed by the team.

According to the findings 60-70% of the Dalits in a situation of despair are still waiting for shelter in the form of tents/tarpaulins or safer locations. It was found that in 80% of the villages shelter had been provided to the dominant caste members and in most cases not to Dalit families. While the Government have attempted to make temporary settlements possible based on land ownership, this is also excluding the Dalits who are mostly landless.

In relation to receiving food the report finds that two weeks after the earthquake only 40% had received food support. In relation to the food received Dalits also complained that this was unequally distributed, where, for example, Dalit families received one pack of rice and non-Dalits two packs. On the positive side the report does however note that in Rasuwa, Nepal, dominant caste members were found to be giving eight of every 10 packets of rice they received to the Dalits who would otherwise starve.

Access to health services and water was also reported to be a severe issue for the Dalits interviewed. In the relief distribution effort Dalits noted that relief was first and foremost distributed to those that owned concrete houses where those with mud houses (Dalits), damaged as severely, received it last or not at all.

Bhakta Bishwokarma, president of the Nepal National Dalit Social Welfare Organisation (NNDSWO) comments that this situation could have been avoided stating that,

“For rescue and relief operations in Nepal to be non-discriminatory Dalits must be consulted and involved in the planning and delivery, this has not been the case to a sufficient extent following these earthquakes. Humanitarian agents, including Government and international level agencies, must factor combatting caste discrimination into their response if the Dalits are to survive and rebuild their lives.”

Immediate needs for Dalit families assessed are outlined in the report including food, shelter, health, and special attention to Dalit women, children and elderly and the provision of immediate compensation, not based on land rights. A number of recommendations are also offered in the report for ‘Dignified recovery and rehabilitation’.

Last month, fearing that this type of situation may emerge, IDSN urged agencies to counter caste discrimination in aid delivery after the Nepal earthquake. This was based on experiences from past disaster responses in caste-affected countries, such as the response to the 2004 Tsunami in India, where Dalits did not receive aid on an equal footing with their fellow citizens.

”It is saddening to find that despite warnings and predictions that discrimination along caste lines may hinder the equal distribution of aid in Nepal, this report has found that rescue and relief efforts have failed to include Dalits on an equal footing with those higher up in the caste system. We strongly urge all agencies and stakeholders delivering aid to caste affected countries to include specific attention to caste discrimination in their policies and disaster preparedness programmes in future, as well as provide immediate remedy for this clearly unacceptable situation in Nepal,” comments Rikke Nöhrlind, Executive Director of the International Dalit Solidarity Network.

The IDSN report Equality in aid: Addressing caste discrimination in humanitarian response represents an important tool for the work in relation to humanitarian aid in Nepal and other caste-affected countries, to ensure that all appropriate measures are taken to combat caste discrimination in aid delivery and disaster risk reduction. Those involved in relief and reconstruction work in Nepal, including the Government, international agencies, bi-and multilaterals and INGOs, are urged to consult the Equality in Aid Report as well as the new rapid assessment report.