Dalit homes destroyed by Delhi authorities, no warning given

Imagine sitting in your home, it’s ten o´clock in the morning, and you suddenly see a bulldozer, with its jaws wide open, drive up to your front door. You are told that you have thirty minutes to collect your belongings and get out of the family home you have lived in for decades, before it is completely destroyed, reduced to a worthless pile of rubble. 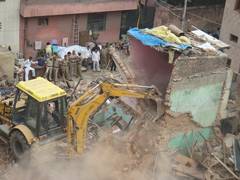 All this, because someone thinks your caste status is not high enough to live next door to them.

How do you feel? What will you salvage? Where will you go? How will you survive?

These were some of the questions running through the minds of the victims of a ruthless and unlawful demolition of Dalit homes, in Karol Bagh/China Market, by the Municipal Corporation of Delhi (MCD) on the 28th of July 2011.

The MCD demolished the brick homes of 15 Dalit families, housing around 80 people, who have been residing in the area, a very posh locality, for decades. The Dalit residents possess ration cards, voter ID cards, birth certificates, death certificates, electricity bills and water bills etc. on the given residence address.

The demolition shows utter disregard by the MCD for laws in place to protect citizens from forced evictions, with no prior notice given, and contravenes several court orders.

The residents were all taken by utter shock when the MCD came suddenly with the bulldozers. The families reported that they had a maximum of 30 minutes to salvage their belongings, due to which very little could be saved and the rest is now forming part of the debris.

Sanjeev Kumar of the National Campaign for Dalit Human Rights (NCDHR), who has been working closely on this issue with the victims says that,

“In this entire issue, the mindset seems to convey a caste based prejudice that runs deep in the implementation of policies, even in the urban areas. The Balmiki community, part of the Dalits, are seen to be ‘polluting’ the area and the people around there. The dominant caste people of the colony are not willing to accept that these Dalits can live among the dominant caste, upper class people. For this reason, with the help of MCD officials, the dominant castes have successfully decimated Dalits’ houses.”

Mukesh Vaidh (32), a driver who lived in one of the homes now destroyed, says, “MCD officials, with around 100 policemen came in the morning at around 10 o’clock and bulldozed our houses and everything in them.”

He explains that the people could not do anything and stood helplessly, as  everything was decimated within half an hour. His family could save only the utensils, a cooking gas cylinder with stove and clothes.

Other evicted victims explain that many didn’t manage to save their precious gold and silver ornaments, valuables that represent all they have earned and saved up for the future. They are still trying to dig out these valuables from the debris.  Losses and damages for these families are enormous. They have lost physical property worth millions of Rupees and the emotional hurt this has cost them is not something that anyone can put a price on.

Rajesh Kumar Singh of NCDHR adds that NCDHR is now trying to see how the relevant provisions of the SC/ST (Prevention of Atrocities) Act can be invoked for seeking justice for the evicted Dalit families.

A petition has been filed at the Delhi High Court and the various partnering organisations have started thinking of alternate ways of holding the government authorities responsible for the miscarriage of the norms and violation of human rights.

In the meantime, these evicted families are now left on their own without any support.

This is the second time in recent months that Delhi authorities have given Dalits no proper warning before moving in to destroy their homes with bulldozers.  Last time was in March 2011 when 750 Dalits homes were destroyed in the demolition of Gayatri Colony . Courts have deemed this type of demolition illegal, and the fact that it is still carried out through Government authorities is a prime example of the completely inadequate implementation of laws in place to protect Dalits in India.