Conference on Dalit Rights & the UN

The Conference on Decade of Dalit Rights UN, 2011-20: Decisive Decade against Discrimination based on Work and Descent was held in Geneva on June 24-25, 2011. 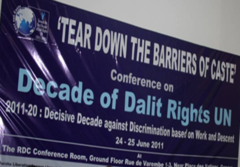 The two-day strategic conference was organised by a group of organisations including the National Campaign on Dalit Human Rights in India (NCDHR), The International Movement against All Forms of Discrimination and Racism (IMADR), the International Dalit Solidarity Network (IDSN), and national and international organisations. The purpose of the conference was to review past interventions, mainly at the UN, and to chalk out effective future strategies required for national and international interventions in the next decade (2011-2020). Participating in the conference were about 50 people from India, Nepal, Sri Lanka, Bangladesh, Japan, and Europe. Several guests from the Office of High Commissioner for Human Rights (OHCHR) also attended the conference.

The meeting was inaugurated by Rory Mungoven, Head of Asia Pacific Unit, OHCHR who spoke on behalf of the High Commissioner for Human Rights, Ms. Navi Pillay.  Mr. Mungoven said that:

“For the High Commissioner, what really matters is what happens on the ground that will make an impact on the lives of those whose daily experience is framed and constrained by caste and occupation. Poverty, unemployment, discrimination in the administration of justice, unequal access to health care, education and housing are among the problems faced by victims of caste based discrimination. Victims include manual scavengers who clean public toilets with their bare hands in cities now aspiring to the highest levels of development; families denied access to a communal water source; children who inherit their parent’s debt and bonded servitude; bright young graduate passed over for appointment or promotion; villagers who are subject to humiliating ritual or even violence by those more powerful; and women who experience multiple forms of discrimination and who face violence, including sexual violence, exploitation, and inhuman treatment.” Read the full speech here

Over the past decade, since the 2001 Durban Conference, communities affected by caste discrimination have made significant achievements in terms of their efforts for the elimination of discrimination. However, many challenges remain in order to comprehensively eliminate descent and work-based discrimination (DWD), the UN terminology covering caste discrimination. The conference declaration states that, “Those affected by caste-based discmrnaiton will keep knocking at the door of the United Nations to be able to enjoy their inalienable, universal human rights. The responsibility to fight against this form of discrimination requires not only the commitement of the affected countries and communities, but also the engagement of the global community.

The conference reviewed interventions made on the issue of discrimination based on work and descent the past decade, mainly in the UN; identified opportunities and outlined future strategies.

The conference outcome was a conference Declaration – presented on the final day of the conference. The Declaration outlines challenges, strategies and expected long-term outcomes at the local, national, regional and international level.

In the days following the conference, a large group of representatives of affected communities and solidarity bodies met with a number of UN Special Rapporteurs and Independent Experts.   On 28 June, the group  presented their concerns to the UN High Commissioner for Human Rights, Navi Pillay, and handed over the conference statement.

Download a print friendly version of the Declaration here

Read the summary report from the conference here