On the 23rd of March the Delhi Development Authority (DDA) bulldozed 750 houses in the Gayatri colony – 80% of which belong to Dalits. 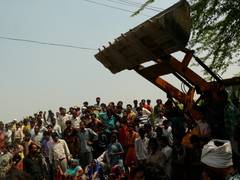 Residents watch their homes being destroyed.

No prior notice was given and the residents were not warned of the demolition, they were not given any time to collect their belongings stored in the huts or ‘juggis’.  When some elders resisted they were charged and assaulted.

Mobilised by Indu Prakash and Hemalatha (IGSSS) and supported by HRLN – NCDHR, Safai Karmachari Andolan, Centre for Social Equity and Inclusion, all gathered near the Gayatri colony along with an initial group of about 200 residents of the colony and warned the DDA that they are violating the Delhi high court order of eviction procedures and all established norms of human rights.

General Secretary of the Dalit Arthik Adhikar Andolan, Paul Divakar, reported from the scene. He explained that although they pleaded with police to respect the High Court the demolition continued while the residents cried as they saw their homes destroyed.

The case will be taken up in a hearing in the High Court. The human rights defenders present are ready with about 150 details documenting the long standing nature of the colony and peacful occupation of the ‘juggis’ by the residents. HRLN advocates are ready with the petitions and affidavits drafted for the case.

This news piece is put together from the initial reports IDSN has received  from Paul Divakar and we will bring more news on the incident and the aftermath in a follow-up news piece in the near future.