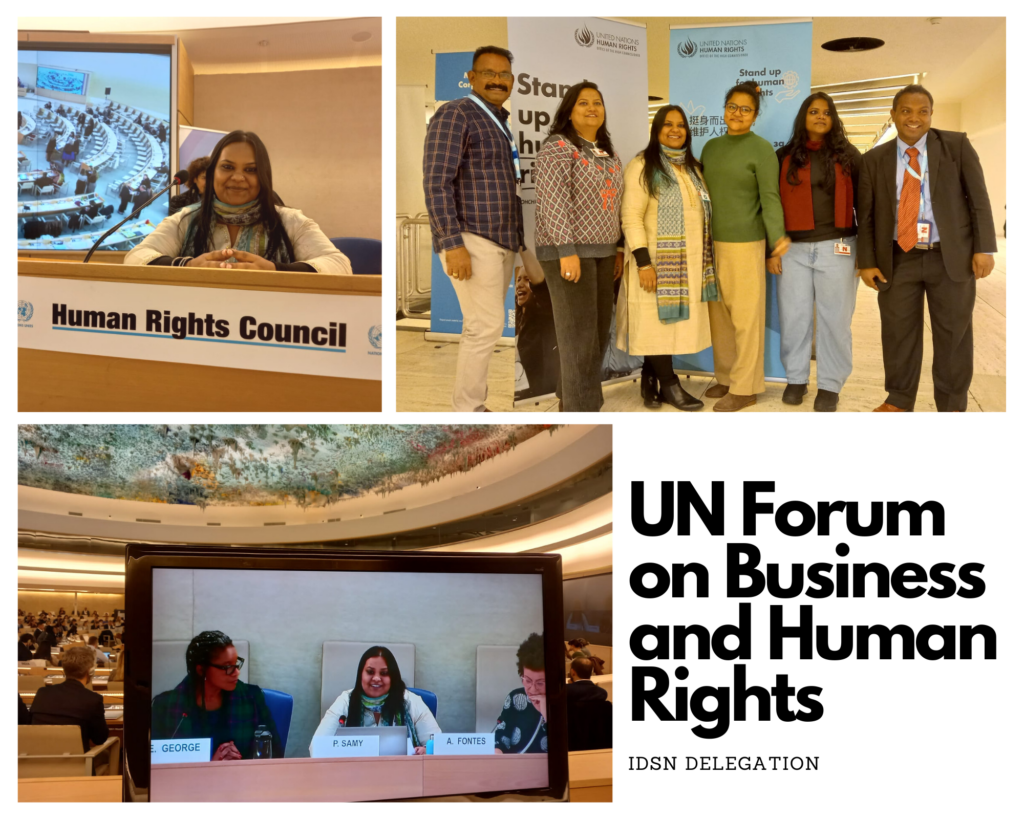 The young Dalit leaders from Nepal and India participated actively in the Forum, through statements from the floor, social media, interviews and in-person interactions during sessions, side-events and breaks. They also took part in side-events, sharing their experiences and learning from the experinces of other.

Priyanka Samy, youth convenor of the National Federation of Dalit Women (NFDW), India, also spoke on the panel in the debate “All Persons at the Centre: Confronting racism to catalyze the BHR agenda”, on the 30 November. She was joined by the new Special Rapporteur on on contemporary forms of racism, racial discrimination, xenophobia and related intolerance, Ms Ashwini KP – appointed in November 2022, Ms Ashwini became the first Dalit woman appointed to the role of the Special Rapporteur, as highlighted in our newspiece.

Racism is a recent issue debated by the Working Group on Business and Human Rights and IDSN welcomes the relevant debates, as there is a need to confront several challenges, such as caste and descent discrimination in global value chains.

Priyanka, during her statement on the panel, underscored that policies that influence the market and business are made without considering Dalit voices, further widening socio-economic inequalities. Also, she explainedthat caste inequality is a cultural, structural and political issue, requiring a political approach to achieve equality.

IDSN has long advocated for more visibility of Dalit voices in the debates on business and human rights at regional and global levels. Business operations in caste-affected countries are at a significant risk of being based on the economic exploitation or seclusion of the caste-oppressed. Violations often include sexual violence against Dalit women and girls, forced prostitution, debt bondage, modern slavery, denial of minimum work standards (ex. low wage, pension, and benefits) which all contribute to the perpetuation of caste and descent discrimination.

To learn more read the guidance from the Ethical Trading Initiative – ‘Caste in Global Supply Chains’.

A collection of IDSN Tweets from the UN Forum on Business and Human Rights: