Today is a day for celebration. Following a historic vote at the UN our big-little human rights solidarity network, IDSN, was finally granted UN consultative status after fighting 15 years for it. After having been repeatedly deferred due to silencing in the form of arbitrary questioning in the smaller UN NGO Committee – IDSN, alongside eight other NGOs, was brought for a vote on 7 December in the bigger UN ECOSOC Committee. We won. 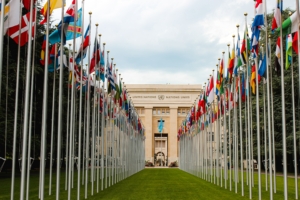 Ahead of the vote, IDSN held the record of the longest pending application in the history of the UN NGO Committee. Over the course of these 15 years – UN experts, INGOs, States and organisations supporting human rights defenders, have spoken up about our case calling it unjust and an act of reprisal against a legitimate human rights organisation. Our heartfelt thank you to all of them. They have been important voices in this process and have given us hope.

We have answered over 100 questions over the course of over 30 sessions of the NGO Committee, many of which have been repetitive, and no fault has ever been found with our organisation or the responses we gave. The history of our application is documented on www.idsn.org/ecosoc.

We have been asked on many occasions, by well-meaning diplomats and others, why we don’t just give up on getting the ECOSOC consultative status. They point out that IDSN has managed to ensure that Dalit human rights defenders in our network have spoken at the UN, through the help of our International Associates who have offered up space and time on their platforms. We have successfully engaged with UN mandates and bodies in spite of not having the status.

It has been tough, and we have spent a lot of valuable time complying with the repeated requests of the NGO Committee. We have even on some frustrated occasions asked ourselves whether we should give up – but every time this has come up we, and the Dalit rights defenders in our membership, have stood firm. We will not give in. So we kept going, kept fighting.

Dalit voices will not be silenced! After 15 years of fighting for this at the UN we are so moved that it has finally happened because enough States were brave enough to stand up for us. There will be tears when the first delegate ever with an IDSN badge passes through the gates of the UN – because this is about so much more than a badge!

Read more about this news in this article by the ISHR – who have been instrumental in advocating for IDSN’s case https://ishr.ch/latest-updates/un-finally-grants-access-to-dalit-rights-organisation-blocked-for-a-record-15-years/