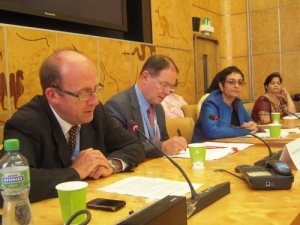 Rory Mungoven, Head of the OHCHR’s Asia Team, reads out the statement from the UN High Commissioner for Human Rights at the side event. The other panelists are the German Ambassador, OHCHR Section Chief Jyoti Sanghera (the event’s moderator), and keynote speaker Manjula Pradeep. Photo: IDSN

“Many [Dalit women] experience some of the worst forms of discrimination,” said Rashida Manjoo, the UN Special Rapporteur on violence against women in a written statement. “The reality of Dalit women and girls is one of exclusion and marginalization, which perpetuates their subordinate position in society and increases their vulnerability, throughout generations.”

Following a side event on 4 June 2013 at the UN Human Rights Council on multiple and intersecting forms of discrimination and violence against Dalit women and women from similarly affected communities, IMADR, Human Rights Watch, Minority Rights Group International and the International Dalit Solidarity Network called on UN member states to support efforts to eliminate gender- and caste-based discrimination.

The multiple forms of discrimination and violence against Dalit women have mostly been neglected until now, but some UN human rights bodies, including Special Rapporteurs and the Office of the High Commissioner for Human Rights, have begun to pay attention to this serious human rights issue.

Dalit women leaders from four caste-affected countries in South Asia took part in the side event and made strong appeals to the international community as well as their own governments to address discrimination. This was the first time that a UN event focused exclusively on the situation of Dalit women, whose courageous struggle for human rights has come a long way over the past decade.

Addressing the event in a written statement, the UN High Commissioner for Human Rights, Navi Pillay, reiterated her “fullest commitment in contributing to the eradication of caste discrimination and untouchability and the correlated deeply rooted exclusion, exploitation and marginalisation of Dalit women and other affected groups” through the work of her office.

Ms Pillay, who has spoken out strongly against caste discrimination on a number of occasions, also called on UN member states to “take on the challenge of addressing caste-based discrimination and the human rights violations flowing from this seriously and by mobilising all of their relevant institutions to this end.”

The ambassador from the German UN Mission, Hanns Heinrich Schumacher, said he had been “shocked” when gathering information about the situation of Dalit women and came to realise the “urgency, the dimension of the problem.”

The fact that numerous states co-sponsored the event demonstrates the increased international attention to the situation of Dalit women – an interest that now needs to be transformed into concrete action by the international community as well as caste-affected countries.

One such country is India, home to almost 100 million Dalit women. Although there are laws in place to protect them, implementation remains an obstacle.

“New laws are useless unless they are implemented, as we have seen with previous efforts to ensure protection of Dalit rights,” said Juliette de Rivero, Geneva advocacy director of Human Rights Watch.

Many of the speakers noted that the lack of implementation of legislation that is meant to protect Dalits is a key problem.  Manjula Pradeep, director of the Indian Dalit rights NGO, Navsarjan Trust, stressed the importance of more data about the situation of Dalits and said that, “It is time to look at the intersection of caste and gender.”

Many victims of the combination of caste- and gender-based discrimination live in South Asia where they are known as Dalits. Similar forms of discrimination occur elsewhere as testified by Mariem Salem, a parliamentarian from Mauritania and herself a member of a group targeted for discrimination, the Haratines, who are descendants of former slaves.

Ms Salem noted that the pervading social attitudes and perceptions which stigmatise Haratine in general are “a key challenge for Haratine women.” She added that “specific types of work continue to be assigned to them on the basis of their hierarchical status,” a description that could also have been applied to Dalit women in South Asia.

Statement from the UN High Commissioner for Human Rights

Statement from the UN Special Rapporteur on violence against women

Flyer for side event on Dalit women