Dalit women raise their voices in the UN

Nine Dalit women activists from South Asia attended the UN Human Rights Council in Geneva last week. Members of the group spoke at a side event on Dalit women on 4 June, and they appealed to UN member states to address their situation. 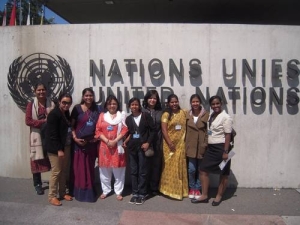 “When I started campaigning for Dalit rights 20 years ago, I never thought that I would be speaking at the UN.”

This was, however, exactly what Manjula Pradeep, a seasoned campaigner for Dalit human rights from India, did on Tuesday 4 June as she addressed a UN side event focusing on caste- and gender-based discrimination and violence. The event included strong statements from the UN High Commissioner for Human Rights and the UN Special Rapporteur on violence against women.

Ms Pradeep, Director of the human rights organisation Navsarjan Trust in Gujarat, has advocated for Dalit rights on the international stage for more than a decade and has participated in a number of UN events. This was, however, the first time that such an event – and indeed, the visit of a group of Dalits to Geneva – focused almost exclusively on the human rights violations that Dalit women have to endure.

Speaking movingly about cases of discrimination and violence against Dalit women, Manjula Pradeep pointed out how difficult it is to face the challenge of being a woman and a Dalit, especially in a country like India where girl children are often unwanted. She noted that it was time for more research on “intersecting forms of discrimination”, i.e. those of caste and gender.

Together with Manjula Pradeep, two other Dalit human rights campaigners, Asha Kowtal from India and Durga Sob from Nepal, were the most experienced members of a group of nine Dalit women that also counted activists from Bangladesh and Pakistan. In these countries the Dalit movement is not as strong as in India and Nepal, but Dalit women suffer many of the same problems.

In her intervention at the side event, Durga Sob noted that 49 per cent of Dalit women in Nepal encounter different forms of violence, but only 4.4 per cent of these incidents are reported to the police. Dalit women mostly fear to speak out against the violence that they suffer, not only from the surrounding society, but also within their own families, she said.

Asha Kowtal gave some examples of the risks Dalit women run just by being Dalit. She noted that a woman born into a lower caste is seen as a lower character. This makes her a target of violence and her body an object of use, e.g. by powerful landlords. When Dalit women try to assert themselves, they risk violent retaliation, “not just to silence me, but the entire community”.

She also summed up the various interventions at the side event by declaring herself encouraged by the recent international focus on the situation of Dalits and Dalit women. Asha Kowtal acknowledged the “complete solidarity” of the UN High Commissioner for Human Rights, Navi Pillay, who in the past three-four years has issued a number of strong statements on caste discrimination.

The side event was the undisputed highlight of an intense working week that also included numerous meetings and briefings with diplomats and UN representatives as well as discussions and knowledge and experience sharing within the group of Dalit women.

While some members of the group were very familiar with the UN human rights system, others were newcomers, including Bagwhani Rathore from Pakistan. She is active in the Pakistan Dalit Solidarity Network, but until now her advocacy work has been confined to the local and provincial level.

“It is my first experience with such high level meetings. I am watching what is happening and learning how to lobby, how to put forward different themes and key points to the international community,” she said.

Whether lobbying at the UN makes a difference on the ground is another question. Bagwhani Rathore recounted her own experience with working with children. There are international mechanisms to protect them, but the situation on the ground remains the same: “At least if an issue like caste discrimination is recognised at this level, there may be international pressure on national governments. But there is a long way to go,” she concluded.

No one who is familiar with Dalit and caste discrimination issues would disagree with that statement, but many of the Dalit women activists visiting Geneva last week have already travelled very far – in more than one sense of the word.

Statement from the UN Special Rapporteur on violence against women