Rights groups have urged the Indian government to end human rights abuses tied to its project with South Korean steel giant POSCO and to stop illegal seizures of land that may forcibly displace thousands of Dalits and other vulnerable communities. 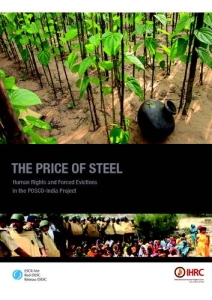 A huge industrial project in the Indian state of Odisha threatens to destroy a vibrant, sustainable local economy and the livelihoods of as many as 22,000 people, including thousands of Dalits.

A new report calls for a suspension of the US$ 12 billion POSCO-India project and a halt to the ensuing human rights abuses “before they become even more catastrophic in scale”. The report’s authors accuse the Indian government of violating Indian and international law by attempting to forcibly evict communities in order to make way for a steel plant and a port in Jagatsinghpur district.

“Should the project move forward, entire villages will be decimated, livelihoods will be destroyed, and families will be rendered homeless, all in the name of ‘development,’” said Miloon Kothari, former UN Special Rapporteur on the right to adequate housing and Executive Director of the Housing and Land Rights Network. “Forced evictions present serious threats to human rights. The impact on those affected can often be characterized as a human tragedy.”

The report – The Price of Steel: Human Rights and Forced Evictions in the POSCO-India Project – is produced by the International Human Rights Clinic (IHRC) at New York University School of Law and the International Network for Economic, Social and Cultural Rights (ESCR-Net) based on a year-long investigation.

The report notes that “generally, forced evictions affect the poorest, the socially and economically most vulnerable and marginalized sectors of society, including in this case indigenous peoples, forest dwellers and Dalits.” It is likely, the report adds, that the exclusion of many landless labourers “will particularly affect Dalits, who tend to be disproportionately landless.”

An elderly Dalit woman interviewed for the report insisted that “this is our only land, even though we have no land rights. If you take away our land we will die. You should tell the government: don’t take away our land. You are trying to frighten us with bullets and guns. We have already taken a lot of bullets, like at Balitutha Bridge. I was hit and people had to pick me up and bring me back. When the police started firing we couldn’t find any way to escape. We had to jump in the water and even then they kept firing.”

Of the estimated 22,000 people affected by the project, one third are Dalits. The report stresses that Dalits are “afforded special protections under Indian and international law as a result of their historic and ongoing persecution and marginalization as so-called untouchables. India must take special and concrete measures to ensure the adequate development and protection of Dalits, an obligation it has failed to uphold.”

Since the POSCO-India project started in 2005, the local population has managed to stall it and resist forcible evictions through sustained and peaceful opposition. The authorities have targeted opponents of the project withviolence and arbitrary arrests and detentions.

Professor Smita Narula, co-author of the report and Faculty Director of IHRC, said that communities affected by the project “are living under siege, and suffering severe violations of their fundamental human rights. India must act now to end these abuses and put the rights of its people ahead of the needs of a corporation.”

The Price of Steel: Human Rights and Forced Evictions in the POSCO-India Project (Report)