In a joint submission to the UN’s UPR mechanism, the All Youth Network in Yemen and IDSN provide an alternative report on the precarious human rights conditions of the Al-Akhdam people and urge the Government of Yemen to address their situation. 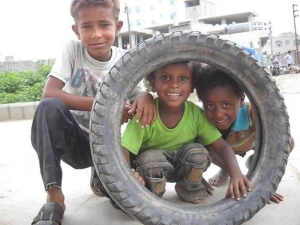 Al-Akhdam children risk sexual, physical and psychological abuse by dominant members of Yemeni society. They live in poverty and have almost no access to education. Photo: All Youth Network

They cannot own land. They are subjected to violence, abuse, harassment and exploitation. They are often extremely poor and are forced to carry out the most menial and dirty jobs. They have almost no access to education. Their children are at constant risk of sexual, physical and psychological abuse by dominant members of society. They are generally despised, considered subhuman and treated as outcastes.

The above description may sound all too familiar to those who are aware of the plight of the so-called ‘untouchables’ in caste-affected countries like India, Nepal and Pakistan. In this case, however, it applies to the situation of Yemen’s oppressed Al-Akhdam people, a group that faces severe forms of discrimination, exclusion and violence similar to those suffered by South Asia’s Dalit population.

According to unofficial sources, there are between 500,000 and 3.5 million Al-Akhdam people in Yemen. For centuries, they have been excluded from mainstream society, and they continue to be subjected to severe forms of descent-based discrimination. As the government has failed to adopt legislation that criminalises abuses against them, the practices of persecution, discrimination and exclusion go unpunished.

The human rights situation of the Al-Akhdam is the subject of an alternative NGO report for the UN’s Universal Periodic Review (UPR) of Yemen, scheduled for January 2014. In this joint submission, prepared with the assistance of independent researcher Dr. Huda Seif, IDSN and the Yemeni organisation All Youth Network for Society Development urge the Government of Yemen to address the serious human rights situation of the Al-Akhdam.

This will be the second time that UN member states examine Yemen’s human rights record through the UPR mechanism. At the first review in 2009, there was no reference to the human rights violations faced by the Al-Akhdam, despite concerns expressed by UN Treaty Bodies – including the Committee on the Elimination of Racial Discrimination and the Committee on Economic, Social and Cultural Rights.

The Government of Yemen has till date failed to act on the observations and recommendations by UN Treaty Bodies to improve the situation of the Al-Akhdam. The authors of the alternative UPR report expect UN member states to call on Yemen to finally address the plight of this severely oppressed minority group.

All Youth Network for Society Development

In pictures: Yemen’s ‘lowest of the low’ (BBC News)

Languishing at the bottom of Yemen’s ladder (New York Times)