Thirty-one parliamentarians from India, Nepal, Pakistan and Bangladesh gathered for a meeting of the Asian Parliamentarians’ Forum on Dalit Concerns in Kathmandu, at the fringes of the 2014 SAARC meeting. The former Prime Minister of Nepal, Baburam Bhatttarai, delivered a remarkable keynote speech, calling for an international framework and a regional thematic approach to eliminate caste discrimination, and cooperation between South Asian parliamentarians for a common agenda. 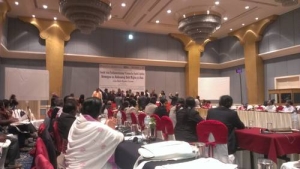 A full programme with sessions on strategies for addressing Dalit rights in South Asia, the status of caste discrimination and state and civil society response to +2015 sustainable development goals had been organised, as part of a meeting of the Asian Dalit Rights Forum in Kathmandu on the 25th November 2014.

The former Prime Minister of Nepal and Chair of the Constitutional Political Dialogue and Consensus Committee of the CA, Mr. Baburam Bhatttarai highlighted the fact that despite constitutional safeguards and progressive legislation to combat caste discrimination, South Asian countries were not progressing significantly on this issue. He recommended that countries come together at the regional level and that the international level also play a role in supporting the struggle to end caste discrimination.

“I would like to appeal to the international policy makers to work towards increased social justice, equality, inclusion and the recognition of human rights. We need to design and develop a common framework for the elimination of discrimination based on work and descent,” stated Mr. Bhattarai.

The engagement of the Parliamentarians at a regional level in the struggle to end caste discrimination is an important factor in leveraging regional cooperation in addressing the issue.

At the meeting of the Asian Dalit Rights Forum (ADRF), Benchmarking studies from Bangladesh, Nepal and India, against the draft UN principles and Guidelines for the Effective Elimination of Discrimination based on Work and Descent, were also released. The studies across 12 thematic areas explore implementation, gaps identified and recommendations for full implementation of measures, detailing current national mechanisms and measures, their impact on the communities, and the response by Dalit and wider communities.

The meeting was organised in the context of the People’s SAARC initiative, with several other events on caste-based discrimination, including seven thematic workshops and participation of Dalit activists from across South Asia.

Dalit rights were also duly included in the final declaration of the People’s SAARC. Among other references the declaration states that the Peoples SAARC demand action from states to,

“Put in place comprehensive legal policy, budgetary and programmatic measures in each country in order to safeguard the social, economic and cultural and civil and political rights of millions of dalits to fully enjoy their citizenship rights at par with other citizens with special recognition of the rights and entitlement of dalit women.”

Dalit women from across South Asia gathered for a rally, and the many activities in Kathmandu and coming together of Dalit leaders and activists created a high degree of visibility for the struggle against caste discrimination.

Read the final declaration from the People’s SAARC