Desperately needed shelter and relief items are not reaching hundreds of thousands of Dalits who are left homeless after the severe flooding in Pakistan’s Sindh province. Dalits are being discriminated against because their caste relegates them to the bottom of the social order in Pakistan and ‘untouchability practices’ exclude them from sharing the same shelters as other members of society. 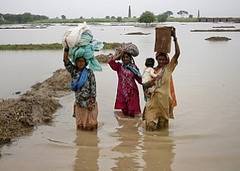 The President of Pakistan, Asif Ali Zardai, has spoken out against this discrimination against Dalits saying that any discrimination in extending rescue, relief and rehabilitation operations to anyone on the basis of caste, creed or religion is “Unacceptable” and has called for a report from the provincial government on the situation.

“The school I teach in has been turned into a camp for flood affected people, but when three Hindu families from the Kohli caste [Dalits] sought refuge there, they were denied it,” says Jewat Ram, a local school teacher in Sindh.

“Mostly government schools are used as flood relief camps but no single Dalit family has been witnessed to be accommodated in school camps due to prevailing ‘untouchability’,” says Kalavanti Raja, from the Pakistan Dalit Solidarity Network (PDSN).

Media reports from a number of different areas in Sindh all confirm that caste discrimination is severely inhibiting Dalits’ access to relief aid. Beyond being turned away from relief camps and having to live and sleep in the open air, food, water and blankets are also being diverted from reaching the Dalits.

It has been reported that the Pakistan Fisherfolk Forum (PFF) sent two truckloads of relief goods to 200 Hindu Families but that the trucks were hijacked and looted.

It has also been reported that there is massive corruption in the distribution of relief aid with political affiliation given priority over actual need.

“With the elections ahead, presently most of the camps are facilitated as election campaign grounds to collect sympathies for votes and unfortunately most Dalits are not registered in voting lists and are also therefore not given priority,” explains Kalavanti Raja.

The situation for the Dalits is desperate and the International Dalit Solidarity (IDSN) has been advocating for many years now that caste discrimination needs to be taken into account when planning and implementing relief operations in caste affected countries. Last year, floodings in Sindh were also rife with reports of caste discrimination in relief efforts  and across the region this problem comes up repeatedly when natural disasters strike.

The Pakistan Dalit Solidarity Network (PDSN) will release a fact-finding report on caste discrimination in the relief efforts of this flooding and in the meantime they are doing all they can to raise awareness and their member organisations are also organising relief work intended to reach Dalit families.

With a disaster of this magnitude, however, it is imperative that anti-discrimination measures are streamlined into all relief work intended to help those who need it the most.