The UN and national level Dalit bodies are urging the Government to end the bonded labour system in Nepal, known as the Haliya system, and implement rehabilitation schemes for freed Haliyas. Haliyas in Nepal are predominantly Dalits, excluded from other work due to rampant caste discrimination. 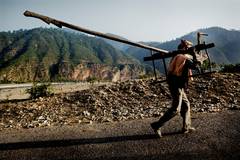 Read more about Dalits and Bonded Labour in Nepal

End the Haliya system in Nepal say the NHRC, NDC, NWC and UN

KATHMANDU – Although the September 2008 agreement between the Government of Nepal and Federation of National Haliya Liberation Society formally declared the liberation of Haliyas, tangible outcomes have yet to be achieved. The draft Haliya Prohibition Bill has not been passed, and the Government has yet to form the high level Haliya Emancipation and Rehabilitation Commission as agreed, or to publicize the results of the survey of Haliyas in Nepal”, stated a press statement released today by National Human Rights Commission, National Dalit Commission, National Women Commission and two UN agencies, the International Labour Organisation and the UN Human Rights Office in Nepal.

“Three years after signing of the agreement, freed Haliyas have yet to receive promised relief and rehabilitation, and have yet to be issued with identity cards. Consequently, the freed Haliyas continue to face difficulty in accessing basic needs including food, shelter and health services, thus forcing them to live in often deplorable conditions. This has a particular impact on the families of the Haliyas including women and children. The lack of access to alternative livelihoods – as promised in the agreement – has also compelled many Haliyas to continue as bonded labourers with their former landlords”, the press statement continues.

On the occasion of the 3rd anniversary of Haliya Liberation Day on 21 Bhadra, 2068 (7 September 2011),  he National Human Rights Commission, the National Dalit Commission, the National Women Commission, the International Labour Organisation and UN Human Rights Office in Nepal call for the immediate, effective and timely implementation of the 2008 agreement. This includes the enactment of the Haliya Act in line with international standards and the need to address Haliya rehabilitation in a comprehensive and sustainable manner. They also want to remind the Government that the NHRC has made a number of recommendations on the issue of continuing Haliya practices that have yet to be implemented.