Thousands of Dalit families in Pakistan’s Sindh province are thought to be affected by flooding and now face discrimination during relief efforts. 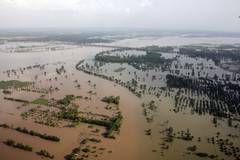 During natural disasters, such as the floods in Pakistan, Dalits are particularly vulnerable. This photo was taken in Punjab. UN Photo/Evan Schneider

The devastating floods that are ravaging Pakistan have caused much suffering among members of the country’s Dalit population.

According to the Pakistan Dalit Solidarity Network (PDSN), Dalit families in Sindh province are being doubly affected by the floods. The actual disaster has displaced them, and now they are facing caste discrimination during relief efforts.

PDSN has knowledge of three cases where Dalits – known as ‘scheduled castes’ – were denied access to relief camps and were badly treated. PDSN has dispatched a fact finding team to the interior of Sindh province to assess the actual number of Dalits that have been displaced by the floods. The network estimates that thousands of Dalits have been affected.

PDSN has also written a letter to the Sindh Chief Minister drawing his attention to discrimination and urged the government to ensure that Dalits are treated with justice in relief and aid. A Sindh minister and a Dalit legislator have promised to take up this issue in the parliament.

This situation is similar to what happens during floods in other parts of South Asia, including neighbouring India. Dalits are particularly vulnerable when natural disasters strike as dominant castes are often responsible for the distribution of aid and discriminate against Dalits in the process.

IDSN is urging the international community to incorporate measures against caste discrimination in disaster relief operations and development programmes.

The first comprehensive international framework to address caste discrimination, the UN Principles and Guidelines for the effective elimination of discrimination based on work and descent, contain recommendations for governments to adopt special measures to tackle discrimination in such programmes.