Two United Nations Independent Experts have published a joint report from their visit to Bangladesh in December 2009. The experts note that Dalits suffer from “terrible living conditions.” 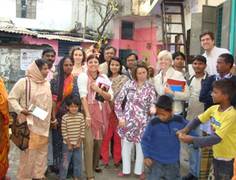 The Government of Bangladesh should take concrete steps to address and eliminate caste discrimination, which affects the country’s estimated 5.5 million Dalits. One such step would be the establishment of a special commission on Dalit issues.

“In their meetings with Dalits,” the report notes, “the experts perceived an overwhelming feeling of their being ‘trapped’. Dalits feel they have no opportunity to seek other jobs, since their families have had these occupations for generations and because they lack adequate education. Pervasive discrimination against them keeps them poor, uneducated, in terrible living conditions and in menial jobs.”

The experts acknowledge that the Government of Bangladesh “recognizes the pattern of discrimination against occupational groups related to caste systems,” but that it “should explicitly recognize the discrimination experienced by Dalits and take more concrete steps to redress it, including through the enforcement of existing laws and the establishment of a special commission with a mandate to address concerns particular to Dalits.”

The Independent Expert on water and sanitation expresses concern with discrimination against sweepers, who are predominantly Dalits. Sweepers clean out sewers and septic tanks and are subjected to considerable health risks. In rural areas, their job is akin to manual scavenging. Although they work in sanitation, they have no access to water and sanitation in their own homes.

In the concluding chapter of the report, Ms de Albuquerque urges the Government of Bangladesh to “adopt an explicit policy to address the situation of Dalits, and to eliminate discrimination against them; and to take special measures to improve the situation of sweepers.”

During their weeklong trip to Bangladesh, the experts visited a Dalit ‘colony’ in Dhaka and also met representatives of the Bangladesh Dalit and Excluded Rights Movement (BDERM). Their report will be presented to the UN Human Rights Council at its 15th session next month.

Click here for extracts on Dalits from the report

Independent Expert on water and sanitation