New reports: Exclusion and untouchability remain widespread and only 5% marry out of their caste 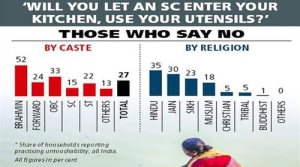 Merely five percent of Indians said they had married a person from a different caste, and 27 percent of households self-reported engaging in untouchability practices, according to the pre-released findings of The India Human Development Survey, conducted by the National Council for Applied Economic Research (NCAER) and Maryland University. When Brahmins (dominant caste) were asked, 52% self-reported to not allow a Dalit to use their kitchen utensils, a common practice of untouchability.

The survey findings on untouchability were particularly stark in some states where untouchability across castes was found to be almost 50% in Madhya Pradesh, Himachal Pradesh, Chhattisgarh, Rajasthan and Bihar and just over 40% in Uttar Pradesh. As the survey only documents self-declared practices of untouchability, the true figures are thought to be even higher.

These findings will not come as a surprise to the authors of the comprehensive and highly collaborative India Exclusion Report 2013-2014, by the Centre for Equity Studies. The report analyses discrimination across labour, education and housing in India. Within all these areas Dalits, and particularly Dalit women, come out at the bottom of the tables.

“India is inherently prone to exclusion practices that make large quantities of people extremely vulnerable to a sliding path towards destitution. The excluded almost exclusively belong to the suppressed castes, religious minorities and tribal groups. Within these categories, women are perhaps the worst off.”

In relation to discrimination in the labour market the report states,

“Caste remains a key determinant of a person’s future. This is perfectly reflected in India’s labour market, which is more governed by laws of social origin than by statutory legislation. Moreover, violation of caste rules by Dalits seeking to break caste-related employment barriers is prone to severe punishment from dominant castes, including economic boycotts and even physical violence.”

“Traditional caste rules mandate forced labour from certain communities. Caste is one of the foundations of the bonded labour system and remains a key feature of bondage even in non-agricultural industries today. The lack of access to their own land, combined with this expectation to perform free labour and the threat of violence and economic boycott against those who challenge their expected social roles, keeps many Dalit families in bondage and a perpetual state of poverty.”

According to the India Exclusion report the Musahar Dalits are among one of the most vulnerable groups with less than 10% of Musahar Dalit children studying, a female literacy rate of just 2% and a school drop-out rate of nearly 100%.

Across the border in Nepal, Dalits also reign at the bottom of all tables in the recently published Nepal Multidimensional Social Inclusion Index, by Tribhuvan University’s Central Department of Sociology and Anthropology. The Index attempts to encompass all aspects of life and is a composite derived from six other indices: social, economic, political, cultural, gender, and social cohesion.

Across all counts Dalits are faring very poorly in Nepal and gender discrimination is also high across castes. There is a glaring gap between especially Tarai Dalits, and their dominant caste countrymen from the same region when it comes to all dimensions of the index. Muslims and other ethnic minorities are also represented at the bottom of the ranks.

The findings of these three recent reports counter popular assertions that caste discrimination is a thing of the past, or on the retreat, and beckon that all those with an interest in equality and inclusion take the caste dimension very seriously when engaging with caste-affected countries.