In an effort to address the persistence of caste discrimination, despite legal measures forbidding it, the Office of the Prime Minister and Council of Ministers (OPMCM) held a consultation workshop on the implementation status of UN UPR recommendations concerning caste-based discrimination. 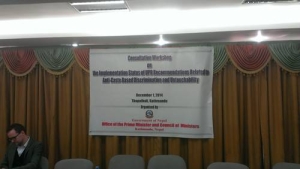 The workshop presented a unique opportunity for state and non-state actors to discuss the gaps and challenges in implementation in relation to existing laws to address caste-based discrimination and the recommendations from the UN Nepal Universal Periodic Review (UPR) on this issue.

These gaps include the lack of enforcement of the Anti-Caste Discrimination and Untouchability Act (2011) with only 22 judgements till date, establishing the National Dalit Commission as a statutory body, enforcement of social and economic rights, and statistical reporting on Dalit inclusion in Government services such as the military, the police and teaching staff.

The workshop enabled a constructive dialogue among 40 participants;  government officials  from the OPMPCM and 10 line ministries, representatives of the police and the army, the Attorney General’s office and national human rights institutions, Dalit civil society organisations and the International Dalit Solidarity Network (IDSN).

Rikke Nöhrlind, Executive Director of IDSN, facilitated a session on human rights standards and measures for effective elimination of caste-based discrimination; Yam Bahadur Kisan, Social Inclusion Expert addressed the outcomes of  the ongoing UPR consultations on six major marginalised communities. Other speakers from civil society were Bhakta Bishwakarma, President of NNDSWO and Anshu Manav from FEDO who presented core issues and implementation status of UPR recommendations, including those specifically related to the rights of Dalit women and girls.

Civil society representatives recommended the development of a National Action Plan for the Elimination of Caste Discrimination and Untouchability and a road map for its implementation. Ms. Nöhrlind suggested taking guidance from the UN human rights system, and establishing multi-stakeholder cooperation between the government, the UN Country Team, national human rights institutions, civil society and bilateral and other multilateral donors for a concerted effort.

The Government representatives acknowledged the gaps in implementation highlighted by the civil society representatives pointing to key barriers such as the lack of awareness among both officials and the general public of the legislation addressing caste-based discrimination.

Officials also acknowledged that the mechanisms in place to implement these laws were not yet fully functional and stressed the importance of enhancing the reporting culture on caste discrimination.

It was also pointed out, that the Untouchability act needed to be reviewed and improvements made for access to justice and training of those who are to implement the laws.  Officials called on Dalit and non-Dalit civil society organisations to play an active role in on the existence and applicability of these laws.

The OPMCM underlined its efforts to enforce clear roles in reporting and implementation and the need to build the capacity also at the local level. It was also acknowledged, that more investment in social infrastructure was needed.

Among the solutions discussed were broad awareness raising campaigns as well as consultations between Dalits and non-Dalits for measures to change the ‘mind-set’ leading to caste-based crimes.  A stronger state-civil society engagement and more informal spaces to address challenges better were common recommendations.

The workshop is seen as an important stepping stone in an ongoing dialogue between state and non-state actors on how to work together to end caste-based discrimination in Nepal.