A long awaited bill prohibiting manual scavenging was passed by the Indian parliament on 7 September. But two leading campaign organisations say that much needs to be done before the total eradication of this inhuman practice is achieved. 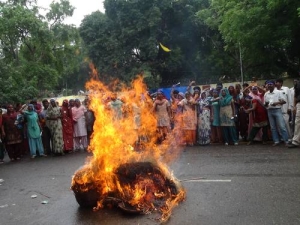 The burning of baskets symbolises the struggle against manual scavenging. Photo: SKA

It is just a first step. A lot is still left to be desired.

These short sentences sum up the reaction of two leading Indian organisations struggling against manual scavenging to the adoption of a new bill on this inhuman practice. Rashtriya Garima Abhiyan and Safai Karmachari Andolan (SKA) both expressed concern about gaps in the new legislation as well as its implementation.

The two houses of the Indian Parliament passed the bill on 6 and 7 September respectively. Previous legislation on the issue dating back from 1993 had been completely ineffective. When moving the bill, Minister for Social Justice Kumari Selja noted that “this dehumanizing practice is inconsistent with the right to live with dignity, a need was felt for a stringent law on the issue” and added that “we want to remove the stigma and blot on the society”.

According to SKA, the passing of the bill that prohibits employment of manual scavengers and provides for their rehabilitation is “an effort to rectify the historical injustice and indignity suffered by manual scavengers.” However, the organisation noted that while the intentions of the bill are good, it is “quite weak in action”.

To Rashtriya Garima Abhiyan, the adoption of the law is “a first step”, but its success depends on its implementation. Important remaining “struggle points” are “inclusion of remaining provisions in the rules, budgetary allocations, education about the new law in our community and larger society.”

The campaign organisations both pointed out that the law does not sufficiently cover Indian Railways, the country’s largest employer of manual scavengers. Rashtriya Garima Abhiyan also noted that the law fails to protect Dalit Muslims and Dalit Christians who work as manual scavengers, but only ‘scheduled castes’, the official term for Dalit Hindus, Sikhs and Buddhists.

SKA demanded that there should be a national survey to identify manual scavengers, including those who had left “this filthy occupation from 1993 till now.” These people should be made eligible for rehabilitation. The organisation also called for a “time bound action plan for creating a manual scavenging free India.”

Manual scavenging is a caste-based and hereditary occupation that involves hundreds of thousands of mostly Dalit women. They remove human excrement from dry toilets using basic tools such as thin boards, buckets and baskets, lined with sacking and carried on the head. The term now also covers sewage workers who carry out their work in dangerous conditions without any protection.

In recent years, the practice has come under scrutiny from international human rights bodies. The UN High Commissioner for Human Rights, Navi Pillay, has called manual scavenging “a deeply unhealthy, unsavoury and undignified job forced upon these people because of the stigma attached to their caste.”

News updates were added to this article on 30 September

Get serious (Editorial, The Hindu)

Does anyone give a s**t? (New Internationalist)

A Critical Analysis of the Act (Beyond Headlines)

Change in sight (The Hindu)

New law no relief to manual scavengers (The Hindu)

Manual scavenging bill: how effective? (Down to Earth)

Memorandum to the Prime Minister (SKA)