The Indian government is ready to introduce new legislation to end manual scavenging. The proposed bill includes tough penalties for those who continue to employ people as scavengers. 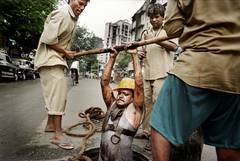 The proposed bill on manual scavenging will expand the definition to include sewage cleaners carrying out their hazardous work without protective gear. Photo: JAKOB CARLSEN

Agencies or families who employ manual scavengers will face prison sentences if they continue this inhuman practice. Last week, the cabinet in New Delhi cleared a new bill which aims to eradicate manual scavenging. The bill proposes that employers be given nine months from now on to move to a system that does not involve such practices.

The new legislation is being proposed due to the failure of a previous law from 1993, which banned manual scavenging, but had very little effect. The inhuman practice of virtually forcing Dalits to clean dry latrines with their bare hands continues across India with possibly more than one million people involved.

The proposed bill includes a much more comprehensive definition of manual scavenging than previously seen. The concept has been redefined from “manually carrying human excreta” to “manually cleaning, carrying, disposing of or otherwise handling in any manner human excreta in an insanitary latrine or in an open drain or pit into which excreta is disposed of.”

This means that the term would also include sewage workers, often Dalits, who descend into sewers in order to clean them without being provided with protective gear. Authorities who engage workers in such dangerous practices could face five year prison sentences.

“We are very satisfied that the union cabinet cleared new legislation to end the inhuman practice of manual scavenging. Many parts of the proposed bill are significant, such as the definition of manual scavengers. Compared to the 1993 act, this definition is very comprehensive,” said Ashif Shaikh from Rashtriya Garima Abhiyan – Jan Sahas, a national level movement which works for the total eradication of manual scavenging and the empowerment of Dalits and other vulnerable section of society.

However, Ashif Shaikh notes that there are still insufficiencies in the proposed bill regarding liberation and rehabilitation of manual scavengers. Hence, his and other organisations are calling for improvements to the bill.

News article from Times of India

Blotch on the socialscape (The Hindu)