Press release: IWGIA and IDSN call on the participants in the Women Deliver Conference in Copenhagen to address discrimination against hundreds of millions of Dalit and indigenous women. 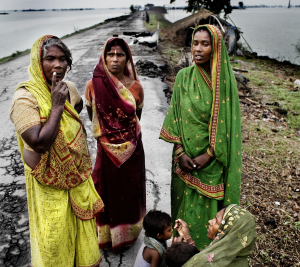 Dalit women in India – they and indigenous women are among the most marginalised people on the planet. Photo: Jakob Carlsen

COPENHAGEN, 11 MAY 2016 — When leaders and activists from all over the world gather in Copenhagen next week to focus on the health and human rights of girls and women, their discussions must include two large groups that suffer extreme social exclusion and marginalisation, the International Work Group for Indigenous Affairs (IWGIA) and the International Dalit Solidarity Network (IDSN) said today.

The organisations work to address the respective problems of indigenous people and people subjected to caste discrimination. Together, these groups number more than 300 million women and girls, who are subjected to multiple forms of discrimination due to gender, poverty, low social status and – in the case of the Dalits – caste.

“We strongly urge the participants in the Women Deliver Conference to address the issues of Dalit and indigenous women. We implore you to include the excluded, and to avoid marginalising the marginalised even further. We see great hope in the strength and potential of this global gathering, and call on the participants to seek partnerships with hundreds of millions of women who suffer from gross violations of their most fundamental human rights and are often forced to live at the very bottom of their societies,” the two organisations said.

The UN Special Rapporteur on indigenous peoples, Victoria Tauli-Corpuz, examined the human rights situation of indigenous women and girls in a recent report. She concluded that “indigenous women experience a broad, multifaceted and complex spectrum of mutually reinforcing human rights abuses”, stemming from different sources of discrimination and marginalisation.

The violation of the rights to self-determination, rights over land and resources as well as multiple forms of violence against indigenous women – including domestic violence, trafficking, violence in the context of conflicts, sexual violence or violence based on tradition – clearly shows their extremely vulnerable position. The report noted that violence against indigenous women is indivisibly linked to the “endemic violations of collective, civil and political, and economic, social and cultural rights” and constitutes a form of structural violence.

Likewise, in a recent milestone report on caste-based discrimination, the UN Special Rapporteur on minority issues, Rita Izsák-Ndiaye, stressed that women and girls are particularly vulnerable to caste discrimination and “disproportionately subjected to dire human rights violations, including violence and, particularly, sexual violence, trafficking, early and/or forced marriage and harmful traditional practices.” The rapporteur observed that atrocities against women from marginalised castes are often committed when they try to assert their rights and challenge caste and gender norms. The violence that affects both groups is very often carried out with impunity.

The Special Rapporteur also listed caste discrimination as a “major cause of poverty, inequality and social exclusion” and called on states to “consider including caste-specific indicators to ensure that the Sustainable Development Goals (SDGs) and their targets address the situation of affected groups.”

As the SDGs and their implementation are of central importance to the Women Deliver Conference, it is relevant to note that Dalit and indigenous women often face limited or no access to health care due to poverty and discrimination. The same goes for education and a number of other key areas. This lack of access condemns these groups to lag behind others – contrary to the spirit and commitment of the SDGs which are supposed to ensure that no one is left behind.

As these structural inequalities affect hundreds of millions of girls and women, it becomes even more urgent to include the plight of Dalit and indigenous women in the Women Deliver discussions, not least those that focus on violence against women and access to justice, health, education and political participation – and to find solutions that will enable these marginalised groups to become drivers of development and powerful agents of change.

“Unless the situation of more than 300 million Dalit and indigenous women is specifically addressed as an integral part of the international development agenda, especially the discussions about women’s rights and the achievement of the Sustainable Development Goals, the commitment expressed by Head of States of “leaving no one behind” will be meaningless. Yet again, indigenous and Dalit women will be let down and pushed even further towards exclusion from global development efforts,” IWGIA and IDSN concluded.

Marginalisation and Impunity – Violence against Women and Girls (publication)